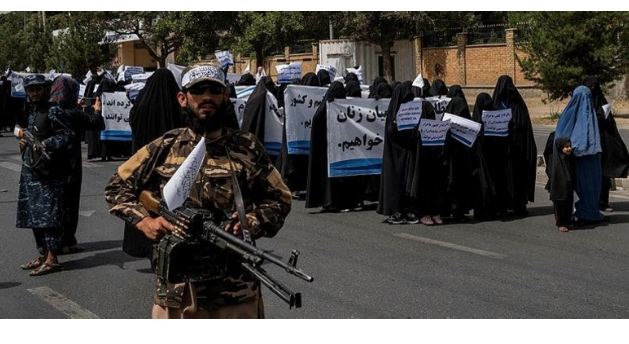 KABUL: Dozens of women on Saturday marched in support of the Taliban government in the Afghan capital, local media outlets reported.

Dozens of women wearing black hijabs and waving Taliban flags staged the gathering at the Kabul Educational University and later marched through nearby streets, according to footage from pro-Taliban media.

The Taliban provided security for these women and officially invited journalists to cover the event.

In recent days, Taliban fighters have violently suppressed anti-Pakistan and anti-Taliban protests by hundreds of men and women across the country demanding freedom, education and equal rights.

Journalists were detained and tortured for covering the protests.

Reacting to Saturday’s event, Afghan activist Hamidullah said on Twittter that participants “do not represent Afghan women as a whole.”

“I’m not sure they are all women because I have seen hundreds of Taliban in women’s clothes in the past years,” Daud Naji, a former senior government official, wrote on Twitter.

In the meantime, anti-Taliban and anti-Pakistan protests continued in the provincial capital of Nimruz on Saturday, a former local official confirmed.

A group of women protested in Zaranj city, chanting “justice and freedom are our inalienable rights,” according to footage posted on social media.