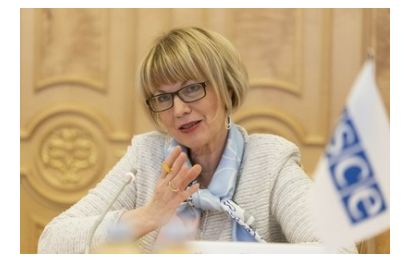 Tashkent: The Secretary General of the Organization for Security and Cooperation in Europe (OSCE) Helga Schmid will visit Uzbekistan in November to attend the conference dedicated to the 10th anniversary of the joint implementation of the UN Global Counter-Terrorism Strategy in Central Asia, the press service of the Senate said.

On November 7, the speaker of the upper house of parliament, Tanzila Narbaeva, met with the head of the OSCE as part of the visit of the parliamentary delegation of Uzbekistan to Vienna to attend the Summit of Women Speakers and the World Conference of Speakers of Parliaments.

During the meeting Helga Schmid told about the OSCE’s decision to co-organize the conference on the UN Global Counter-Terrorism Strategy. Within the framework of the visit, Helga Schmid also intends to hold a number of meetings with officials of Uzbekistan.

At the meeting, the Chairperson of the Senate and the Head of the OSCE discussed the prospects for deepening cooperation between Uzbekistan and the OSCE to promote gender equality issues and enhance the role of youth. The OSCE Secretary General spoke in favor of stepping up cooperation on issues of support for youth and full disclosure of its potential.

Helga Schmid was appointed head of the OSCE in December 2020. Prior to her appointment, she served as Secretary General of the European External Action Service.

As previously reported, the UN Deputy Secretary General, Executive Secretary of the UN Office on Drugs and Crime Ghada Wali will also visit Uzbekistan in November, and the signing of a new UNODC regional program for 2022-2025 is expected.