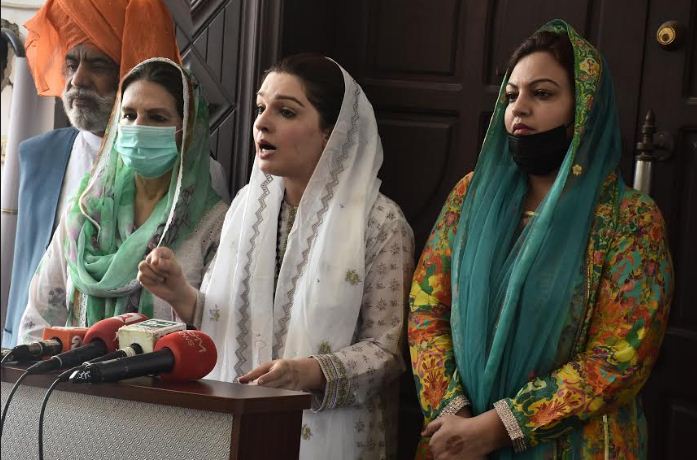 ISLAMABAD, MAY 21 – Mushaal Hussein Mullick, the wife of Chairman Jammu and Kashmir Liberation Front Yasin Malik, said that people of Indian Illegally Occupied Jammu and Kashmir (IIOJK) and inhabitants of war-torn Palestine are facing the worst form of terrorism at the hand of their respective occupied forces. Speaking at a rally held in protest against human right violations in Kashmir and Palestine here on Friday, Mushaal said that the, on one hand, Hindutva regime of India unleashed a wave of barbarism and state terrorism in the occupied Kashmir valley while on the other the apartheid Israeli state made life a hell of the innocent Palestinians through continued airstrikes and ruthless bombardments.

The Hurriyat leader said that the world looking at the bloodbath of the innocent and helpless Muslims like a silent spectator and no one have the courage to give a shut-up call to these two terrorist states. She vowed that Kashmiri and Palestine people could not be deterred and frightened through such brutal tactics, as they would continue struggle for their legitimate, just and birthrights come what may.

Mushaal questioned the role of UNSC and UN and said that what’s the existence of such world bodies which could not in position to implement own passed resolutions.The Chairperson said that it seemed their roles are just limited to pass resolutions and condemnations instead of taking any practical steps to stop aggression. However, she said that the world bodies could be seen playing active role when somewhere muslims are in dominant position or where non-muslim minority faced minor issues.She urged that the muslim world should take the issue as there is a serious need of overhauling these world bodies so as to make them purposeful or else their existence would be of no good.

Mushaal demanded time is ripe that the OIC should prove its worth and should play a proactive role in this critical time of muslim history.She said that if the muslim countries joined their hands they could create great impacts but unfortunately, they are widely divided.  Mushaal lamented that innocent children, women and youth are being tortured to death in Kashmir but the world is silent.She said that helpless and armless Palestinian children, women and men are bombarded and their homes are being destroyed but the world remained unmoved.She demanded an immediate ceasefire in Palestine as there is an acute shortage of shelter homes and medicines and all these fundamental needs should be provided forthwith.Mushaal reminded that the world should play their due role and should stop these Indian and Israeli aggressors and oppressors for committing more war crimes.She urged the world to resolve the Kashmir and Palestine dispute as per the aspirations of the inhabitants of the areas or else peace in the world would remain a distant dream.