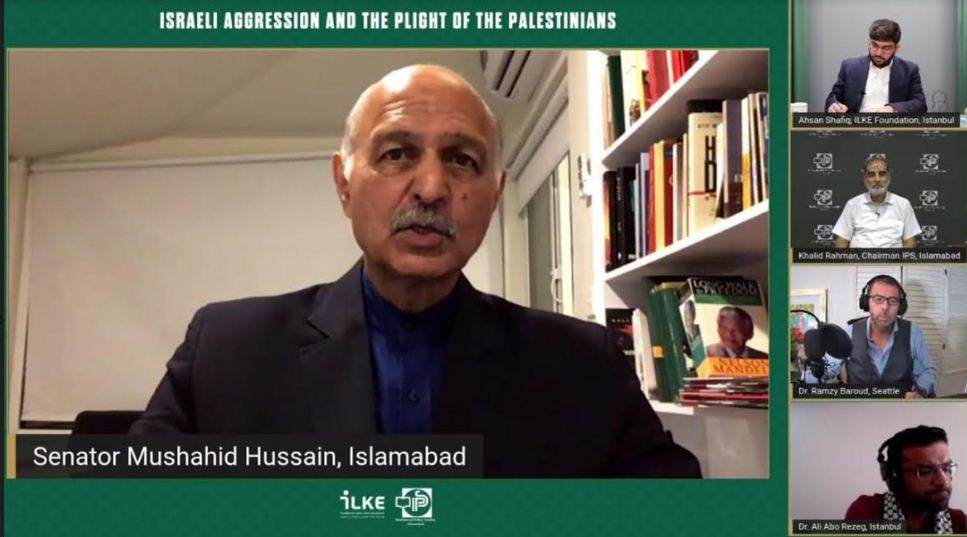 Islamabad, MAY 21 – A change in the world order is vital to rein in states like Israel and resolve the long-standing Palestine issue since the major roadblock is the prevalent unjust world order based on the paradigm of survival of the fittest. In addition, worldwide civil society linkages, alliances of the forces of good across the world, and the anti-apartheid movement model of South Africa can play a central role in this regard.

These views were expressed by eminent geopolitical analysts at an international webinar titled ‘Israeli Aggression and the Plight of the Palestinians’ which was jointly organized by Institute of Policy Studies (IPS), Islamabad and ILKE Foundation, Istanbul.

It was underscored that Pakistan sees an inextricable linkage between Palestine and Kashmir; both are occupied territories, both are denied the right of self-determination, both are under the occupation of fascist regimes that are also racist and Islamophobic – Benjamin Netanyahu in Israel and Narendra Modi in India. Besides, there is an attempt at demographic transformation of a majority into a minority in both occupied territories. As such Islamabad’s policy is very clear – if Pakistan weakens its position on Palestine it will also undermine its position on Kashmir. So the recent ‘recognize Israel’ mantra is now buried deep in the debris of the destruction of Gaza, they added.

The speakers viewed that normalization of relations with Israel, an apartheid state, will not churn out benefits for Muslim countries. Rather, Israel is thumping its nose at Washington, so it would be better to exert pressure diplomatically on the US.

The experts were optimistic that changing global dynamics – with the world transforming into multipolar from unipolar after the Cold War – will benefit the Palestinian cause. A positive aspect, they noted, was the favorable voices within Jews and Israel besides non-Muslims, liberals and civil society, and concerns shown in the media and by the human rights organizations.

The discussants pointed out that Israel launched the latest aggression thinking the Palestinians were isolated because many countries are normalizing relations and they are losing global solidarity. But the violence has spawned a massive global movement rooted in civil society. This can be seen in the demographics of the worldwide pro-Palestinian protests participated in by people from all ethnic, racial and religious backgrounds. People are angry and rightly calling Israel an apartheid genocidal state, which the speakers termed a defining moment in history. Sane voices in solidarity with the Palestinians are also being heard in the US Congress, UK Parliament and the European Parliament, indicating a change in world opinion. This is evident from the biggest protests taking place in London, Madrid and Paris.

The speakers stressed that Muslims must take the leadership role in this global movement. Only by reaching this critical mass they would be able achieve a paradigm shift; that South African moment when apartheid was defeated. Apartheid was crushed in South Africa not because enough governments spoke out but because civil society rose globally and boycotted the apartheid government in all its forms and shapes until they forced their governments to follow suit. Similarly, civil societies are the ones that need to be reached out in the cases of Palestine and Kashmir.

The webinar was informed that the definition of aggression was agreed upon by the International Criminal Court in 2018 and now there is a framework under which the issue can be discussed with reference to Israeli actions related to Palestine. There are a number of international laws and conventions that are being violated through illegal occupation, land annexation, ethnic cleansing, apartheid, collective punishment, human rights as well as several UN resolutions were being flouted.

The discussants expected the civil society supporting the Palestine cause to develop a multipronged strategy of doable options involving, but not limited to, diplomacy, media, social media, civil society and human rights organizations along with pressure tactics and initiation of war crimes cases to find a long-term solution.

Underlining the need for building pressure on the diplomatic front, they opined that likeminded countries such as Pakistan, Turkey and Saudi Arabia should collaborate with other Muslim countries including Iran and Indonesia and non-Muslim countries like China, which is a big supporter of the Palestine cause, without forming different blocs outside the OIC.

The speakers suggested that supportive countries should write a joint letter to US President Joe Biden, telling him the flaws and double standards the US foreign policy entails vis-à-vis the Palestine conflict.

It was also stressed that supportive countries can also launch a flotilla to send humanitarian supplies to Gaza. More importantly, a team of lawyers should be prepared from some of the Muslim countries to file cases of war crimes against fascist Netanyahu, the Israeli prime minister.

The speakers believed that there are several factors that strengthen the Palestinian cause which is a well-recognized case still on the UN agenda. Further, the resolve of the Palestinians to continue their struggle, Arab members of Israel’s parliament who play a role in breaking or making the government, a dynamic diaspora community, and the religious dimension that connects 1.7 billion Muslims with the issue, and availability of a platform like the OIC, are positive aspects.

The discussants reiterated that the Israelis are depriving the people of the occupied territories of their basic rights of free movement, worship, elections, etc. The uprising of the Palestinians in the Gaza Strip, West Bank, Al Quds, Jerusalem, and inside Israel shows the end of the two-state solution.

The speakers were of the view that the Palestinians who live in Gaza, the West Bank, and Israel are one nation who are fighting the aggression as one. Hamas, Islamic Jihad, the Fatah movement and others have to join hands and also involve the Muslims all over the world and ask them to stand in solidarity with them.