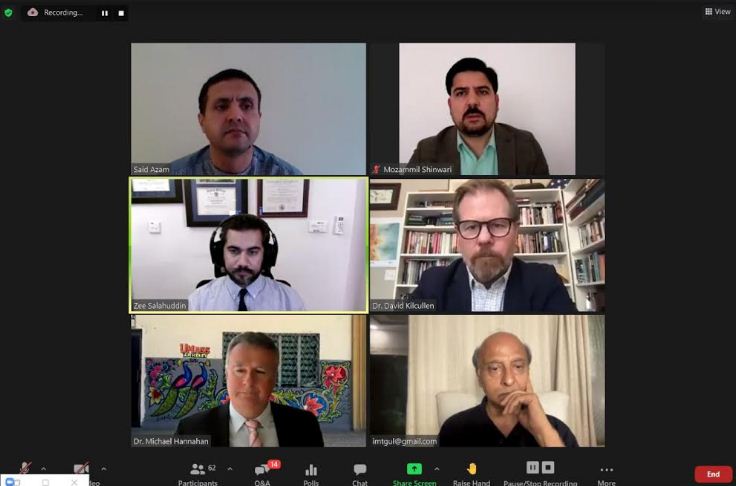 Islamabad, May 21: China must continue playing a vital role in the region after the US withdrawal as they are working on massive development projects in the immediate neighborhood of Afghanistan,i.e., Pakistan and Iran and any instability in Afghanistan will impact them enormously.

These were the remarks made by Dr. David Kilcullen, Professor of International and Political Studies at the UNSW in Canberra, Australia whilst speaking at the quadrilateral webinar organized by the Center for Research and Security Studies Islamabad. The theme of the webinar was“the consequences of the US troop withdrawal this year in terms of a potential civil war, the suffering of the Afghan people over the course of this war, and the most viable path forward.”

Other speakers included Dr. Michael Hannahan, Director of the University of Massachusetts-Amherst (UMass-Amherst) Civic Institute, and a US foreign policy expert,Mr. Said Azam, author and Senior Afghan Journalist, Mr. Muzammil Shinwari, Former Deputy Economic Minister, Afghanistan and Mr. Imtiaz Gul, Executive Director, CRSS.Dr. Kilcullen further added that China’s role is anticipated to support and assist Afghans in securing their fundamental rights post US withdrawal. Moreover, he stated that Australia has been committed to the Afghan cause since 2001 and has made significant efforts to counter terrorism and assist Afghanistan in various avenues.Expressing his fear, Dr. Kilcullen said that Taliban might attack police, Afghan National Army, and local government workers in the coming days to cause unrest in Afghanistan. Nevertheless, the Taliban are not capable enough to seize Kabul anytime soon, however, the provincial capitals are under a great threat. He emphasized that US should try to maintain its intelligence surveillance, and air defense system in Afghanistan even after the troops’ withdrawal.

Dr. Michael Hannahan from the United States highlighted the US citizens’obliviousness vis-à-vis US’ longest war. He was of the view thatUS leaders and stakeholders failed to shape the public narrative about the war properly as they never explained why US was in Afghanistan, what did they accomplish, and why they are withdrawing now?He further stated that after the announcement of the final date of troop withdrawal, a debate has started about the US’ accomplishments in the last two decades.

Highlighting the Afghans’ perspective, both Mr. Said Azam and Mr. Muzammil Shinwari expressed hope that Afghanistan and its neighboring regional countries can turn the challenges posed to Afghanistan after US troops’ withdrawal into opportunities of lasting peace and development. Mr. Azam stated that despite the sufferings and plights of the Afghan people in the last 2 decades, millions of Afghans got access to their fundamental human rights including education, healthcare, and telecommunication industry. The economic, infrastructure, and human development in the last 20 years has been remarkable and would not have been possible without the international community and US’ continued assistance, the same trend should continue in the future to achieve comprehensive peace and development.

However, he expressed his concerns over the Biden administration’s decision of a complete troop withdrawal by September 2021 as the outcomes of the intra-afghan peace talks have not been finalized yet. He suggested that US should withdraw its troops only if the Intra-Afghan Peace dialogue is properly in place and yields significant outputs. Adding to his comments, Mr. Shinwari also stated that the international community should not play a role similar to the 1990s, when they abandoned Afghanistan completely and left it on its own.If this happens, there are chances of a civil war, which will be bloodier than the one Afghanistan witnessed in the 1990s. Moreover, he said that the narco-mafias, warlords, are the ones who benefit from the conflict the most after the troop withdrawal. He also urged regional countries like Pakistan and Iran to play a significant role in sustaining peace in Afghanistan after the US troops pull out.

Executive Director CRSS, Mr. Imtiaz Gul thanked the panelists for participating in the virtual dialogue. Hebriefed the audience that significant challenges such as deep divide and inequalities in the society lead to fundamental rights’ violations. He also stated that US and Europe’s ignorance towards the plight of the Afghans and Palestinians raise the question that why fundamental human rights do not matter to them? He suggested that we should try to build on the positives and generate pressure at the civil society level to urge Afghan stake holders to leave the past behind and build on new narratives to ensure durable peace and stability in Afghanistan.

At the end of the dialogue, the panelists commended CRSS’ efforts for highlighting this extremely important regional subject and inviting relevant stakeholders from several regions to present their viewpoints. Moreover, the panelists also interacted with the audience through a Q&A session.