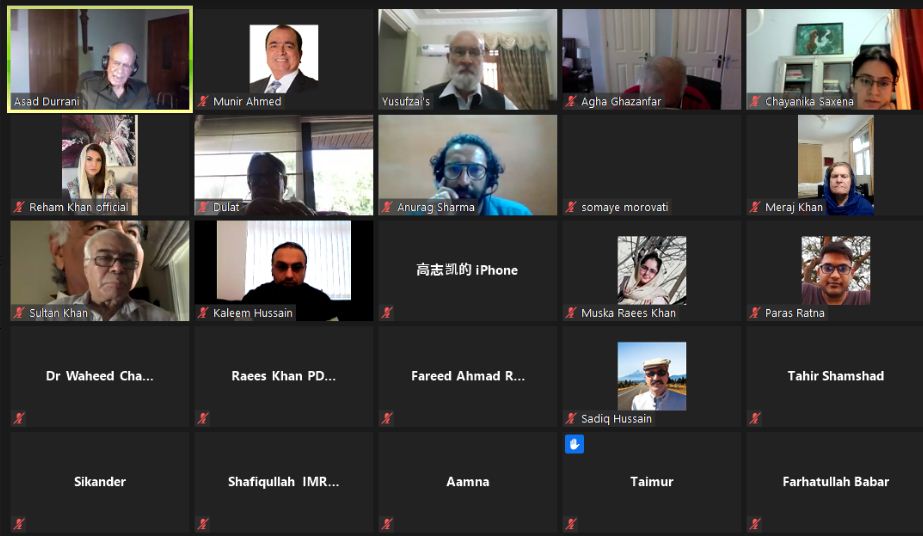 Devcom-Pakistan webinar highlights the repercussions of hurriedly drawdown of the US-NATO troops from Afghanistan without finalizing any peace deal for the stakeholders. The experts believe that 20-year efforts, sacrifice of lives and huge capital and strategic investments are likely to go uncultivated for any sustainable solutions besides putting the region at security risk again.

Islamabad, MAY 8 – The geopolitical experts from different countries in the region have warned of the worst consequences of pulling out the US-Nato troops from Afghanistan without any sustainable peace deal. It would lead the region to geopolitical chaos, instability and rise of insurgency as seen on the first day of the drawdown from the Kandahar airfield. About 150 lives perished in an armed fight between the Afghan soldiers and Taliban to capture the vacated airfield.

They said the investment made for almost 20-years in Afghanistan against terrorism and lives sacrificed are likely to go waste in hurriedly withdrawal of the troops. Somehow, it seems intentional and strategic on part of the US and Nato to dent the ever increasing Chinese, Russian and Iranian strategic and economic interests in the region. Economically weaker, Pakistan has to suffer more with the rise of insurgency particularly on its border areas with Afghanistan.

Lt. General (retd) Muhammad Asad Durrani said a sustainable peace mechanism post the US withdrawal from Afghanistan is indeed desirable but also an uphill task. Several rounds of talks were managed but the parties could not agree to the mechanisms proposed. Taliban were not convinced on the power-sharing as proposed and discussed in the larger perspective.

He said foreign occupation creates some serious contradictions, and the polity gets divided between the freedom-fighters, a warrior class and the opportunist collaborators. Same has happened in Afghanistan about two decades of war against terrorism. A prolonged war of resistance gives rise to a war economy, and its beneficiaries were unlikely to be pro-peace. The resistance believes it won against a powerful external aggressor, who understandably strives to get a good post-exit deal for its client regime. Victors of war too split over the spoils of victory. Some might favour a general amnesty – the others would rather hang the “traitors”.

He said the onus is thus on the neighbours with stake in the stability of the war ravaged country and on credible figures within, to restore peace. Pakistan and some others in the Region had plenty of time to position themselves for this purpose. It’s all up to them now.

Rahimullah Yousafzai said the 20-year war is not won by the US and Nato but Taliban won the Doha negotiations, the pull out is the result of that. Without ensuring their fair role in the future of Afghanistan, Taliban will not accept anything but may join the Istanbul talks afterwards. There is fear of a surge in the radicalization in Afghanistan and its spillover to neighbouring countries. So, all the countries and stakeholders in the region shall join hands for a consolidated peace deal.

Farhatuulah Babar said only a political solution would ensure peace in the region. The big players of the region such as Russia, China, and also India have to play their positive role. otherwise the spillover of racialization would not spare anyone at all.

Victor Gao suggested urgently the UN Security Council meeting to discuss the issue as the US cannot leave Afghanistan in such an irresponsible way. There is a huge task of reconstruction and rebuilding of the economy by engaging natives and Taliban. America shall allocate sufficient funds for post drawdown development in Afghanistan. He said China is also the victim of spillover of the radicalization emerging from Afghanistan to some parts of China. The Chinese government would be willing to contribute to the economic development and engagement of the natives including Taliban.

Reham Khan said the war that was started to end terrorism has ended rather unceremoniously with America leaving those they accused of terror activities, the Taliban, with a dominant role in Afghanistan. While the US is selling the withdrawal of American troops at home as their success in bringing their boys back home safely and honouring campaign promises of the Trump manifesto, the fact is that it is a crushing defeat of the narrative of eradicating terrorism peddled years ago by America. Afghanistan and its neighbours, Pakistan, India and regional big players Russia and China would bear the brunt of the destruction left behind.

Anwar Iqbal said America cannot stay in Afghanistan for a lifetime to manage the forces there. They need to strike a win-win situation while the regional peace should be taken up by all other stakeholders too. Pakistan is likely to suffer the most post-drawdown of the troops. It may offer US airfields in Pakistan for good bucks to support its nose-dived economy if desired by the Biden government.

Chayanika Saxena said the impending US-Nato withdrawal from Afghanistan has come when the entire world is reeling under the impact of a contagious virus. It comes as no surprise then that both the wherewithal and interest of the international actors, including the US, to deal with the simmering conflicts in Afghanistan have taken a hit. Thus, while it is only rational to have expected an eventual American departure, it could not have come at a worse time than this.

She said in the circumstances of increasing attacks against the Afghan National Defense and Security Forces (ANDSF) to killing of young representatives of progress and peace and media persons, it is crucial for the international and regional powers to shore up their support for the Afghanistan government. The High Council for National Reconciliation shall make sure to bring Taliban back to the table of talks to give the ongoing conflict a sustainable end.

Dr. Somaye Morovatti said Iran’s role is very crucial in the post withdrawal but always undermined. Iran can play a strategic role in bringing Taliban to a meaningful peace solution and to abide by the defined parameters. A larger agreement to work together is required in the given circumstances.