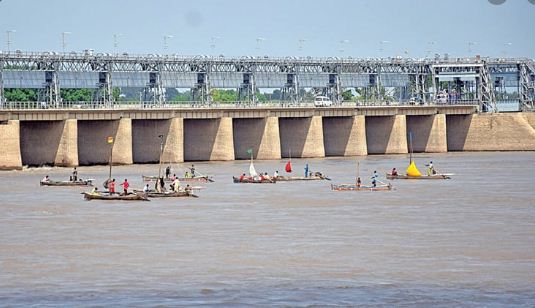 This meeting of the high-level forum of the World Bank reviewed the progress of barrages and its components.

World Bank TTL- Task Team Leader Mr François Onimus appreciated the progress of rehabilitation of barrages at Guddu and SukKur and further said that these barrages are the backbone of the economy of Sindh. He said that if any kind of damages in barrages, its barrage structure and river training works may cause billions of billion dollars to the economy of Sindh. He said that the rehabilitation works at Guddu and Sukkur Barrages will enhance capacity of water supply to their command areas, consisting not only irrigated land but also livestock, Industrial sectors and drinking purposes.

He said that the command area of offtaking canals of Guddu barrage, ground water is brackish and saline which is not drinkable so the overall population depends on canal water. He said that also in the command area of offtaking canals of Sukkur Barrage ground water is almost brackish but due to recharge of ground water through irrigation network recharge which develop shallow lances, near that is used for drinking purpose through hand pumps.

Mr Takeaki Sato, renowned environmentalist of the World Bank briefed that the population of Indus Dolphin should be done between Guddu to Sukkur reach which declared a sensitive area RAMSAR site.

He briefed that this species was endangered which was observed in Indus River,  Ganga River and Rivers in China. He showed keen interest in the rescue of stranded Indus Dolphin in canals. He further mentioned that the initial survey was conducted by Sindh WildLife Department found 132 Indus Dolphin in 1972 while 1490 was found in 2019 which shows continuous growth of Indus Dolphin in Guddu to Sukkur reaches. He further emphasized that at least Indus Dolphin surveys must be carried out on a yearly basis because this species is rare and endangered at Global level. He mentioned that waste and effluent/ toxic water from different locations from upstream of Guddu Barrage, waste water Guddu power plants, Rohri, Sukkur and at different locations downstream of Sukkur which affect not only endangered Dolphins but also fish species as well as aquatic lives.

He further briefed the World Bank that Hilsa (Pala) was migrating from Urban Sea to Multan covering 1000 kilometers but after construction of barrages in Indus River, movement of Pala is confined between urban sea and Kotri Barrage.

In Keeping of view of endangered Hilsa (Pala) is becoming extinct, therefore there is need surviving this endangered species to survive and sustain the Ecosystem of Coastal area through releasing environment flow.

Dr Mahesar said that annually Hilsa catch of in 1953 was 10000 tons while in 2012 reduced 266 tons as per survey. He said that therefore, there is need for further detailed survey not only indigenous species Pala but also local fish species which are rich in nutrition for the health of common people. He urged the effluent releasing from polluted water of Manchhar Lake to stop releasing in Indus River which further degrades water which is used for drinking purposes not only Hyderabad city and associated cities and towns and also metropolitan  city Karachi, it can cause waterborne diseases. He suggested to stop releasing effluent of Industrial and Pharmaceuticals and power houses at up and down stream of Kotri barrage as he called it is dangerous for human lives and fish species.

Briefing to the World Bank team, Mr Mughal said that replacement of gates of three canals off taking canals from Guddu Barrage have been completed, while main barrages gates are under fabrication of Rona Makina facility in Turkey.

PD SBIP Mohi u Ddin Mughal briefed regarding 92 years aged Sukkur Barrage that replacement of six gates such as gate numbers 39,40,35,33,32,31 have to be replaced on emergency basis.  He said that the gate numbers 39, 40 have been replaced while replacing work at 35 is going on, while gate numbers ,33,32 and 31 are under fabrication and their 80 percent average work is completed.

Furthermore, he briefed regarding replacement of 50 main barrage gates of Sukkur Barrage and 56 gates of offtaking canals will be replaced through SBIP/ S-1 contract which is to be awarded up to June 2021.

Mr Chirshall chief resident engineer project implementation consultants further briefed the team of the World Bank that 10 gates of main Guddu Barrage have been fabricated out of 65 gates in Turkey. He stated that six gates fabricated will arrive at the project site of Guddu Barrage before the end of week of  May month 2021.

He described that these gates will be replaced at Guddu Barrage before the coming monsoon floods in Sindh.