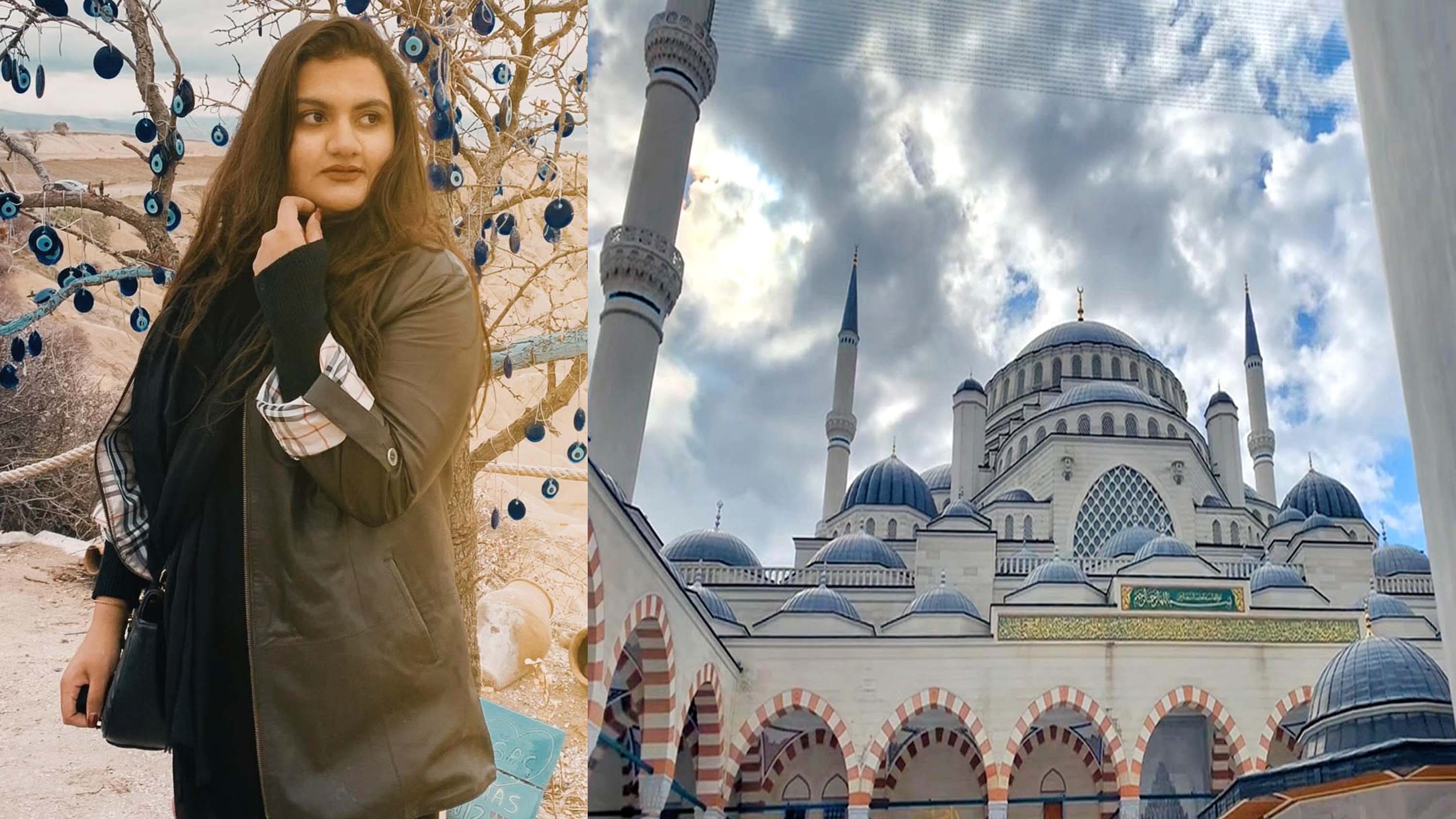 Turkey, my third foreign destination, after Holy Cities of Makkah& Medina and Beijing, began on the 15th of March from Istanbul. I visited Kusadasi, Izmir, Koniya, Antalya and lastly Cappadocia. I managed to fully utilize my luggage allowance and the flight to Istanbul was really smooth. Passing over the high mountain ranges of Iran and Eastern Turkey, I enjoyed an aerial view of Van Lake. Turkey at first glance is the perfect blend of ancient culture, religious belief and lively modernity that encapsulates the ambiance of the nation.

I had heard so much about Turkey from my late grand father who travled Turkey more then six times under RCD (Regional Cooperation for Development) Pakistan Iran & Turkey join hands for developmental activities this was decads ago &my  father about its culture, heritage that it seemed like déjà vu after just spending a day in the captivating.Istanbul felt like a great mix of people and cultures, which is exclusive to the city and is difficult to be seen elsewhere. Most of the people I came across seemed in good spirits and kind except for a few rude cab drivers and I would not blame them as they offer rides to tourists of all kinds. Although March is the start of the spring time yet it was really cold over there.

Turkey is an arguable contender for the title of ‘most fascinating country’ at the cross roads of Asia and Europe.I believe travel experiences can become truly unforgettable owing to the country’s rich history, remarkable and mesmerizing natural landmarks and exuberant cities. I was deeply charmed by what Turkey had to offer and I tried my best to capture my vacation but for the first time in my life I felt limited going by the camera because I wanted to feel completely present for the beauty of this amazing city. On the very first day we got on board the highly praised ‘Bosphorus.

Cruise’. It turned out to be a memorable experience yet I was a bit scared (case in point, the famous Hollywood’s Titanic). I loved the diverse feel of the city including both the European and the Asian sides.

Next on the travel agenda was the Dolmabahce palace, which I expected to be another version of the Topkapi Palace, but to my amazement, it was much bigger. It is the biggest palace in Turkey with 285 rooms, 46 halls, and 6hamam (baths). If you perceive the exterior to be extensively detailed then you have not experienced the inside of this beautiful palace. The interior of Dolmabahce has been designed by the same architect as that of the Opera Palace in Paris, giving its structure a contrasting look, which is European in essence. The Palace is simply stunning owing to its ornateness and sheer magnitude. I remember having to strain my neck to take this picture. Taking photographs and videos is strictly prohibited inside the Palace, but I secretly managed to snap a few (Guilty!!).

We were lucky enough to have our accommodations always in each destination at the central locations, all thanks to our trip organizer Mr. IjlalKhattak (CEO of Baydaar Travels). In Istanbul we stayed right in front of the Taksim Square, next to the famed ‘Istiklal Street’ this gave us the opportunity to experience the unique energy and spirit of Istanbul at its most organic. Long stretch of shops with every product imaginable, cafes and restaurants, live music, bars, cinemas and much more but I believe that my trip would not have been complete without boarding on those beautiful ruby red trams, wandering in the street having a juicy doner kebab wrapped in lavash was everything.

We also visited the iconic Hagia Sophia. This structure is considered the epitome of Byzantine architecture and is said to have “changed the history of architecture.” All these comments came true when I saw it for myself. I also came across the much celebrated Grand Bazaar and fell in love with it. This short visit was fun as I got a chance to meet a lot of interesting people who were willing to chat, help and drink and even offered me tea.It’s the city of lights and colors at the crossroads of Asia and Europe that reminded me of rich historical importance of the city of Istanbul which I heard from my father adding further that his grand father, Syed Sultan Muhammad Shah, was a member of save Khilafat Movement. This movement was established by MoulanaShaukat Ali to save the Ottoman Empire, people of undivided subcontinent were very keen to play their role to save the Ottoman Empire and showed their gesture of good well with Turkish people by putting their limited means of lives on risk as they were under the British Raj in India. Although, the Ottoman Empire could not succeed at that time but the gesture of the people of this part of the Indian subcontinent is still recognized in the memory of Turkish people and their elders still cherish the memories of brotherhood like a valuable gem.

Our trip wasn’t all about Istanbul and I believe that other parts of Turkey were equally rewarding ,and included a visit to Kusadasi where we booked an excursion to the ancient city of Ephesus, which is located on Turkey’s western coast near Selcuk. There, we toured the Library of Celsus, which was originally built to serve as a monumental tomb for Celsus, a Greek philosopher, but later became the largest library of the ancient world. The builders here used an optical illusion to make the building look large. Another quirk of the building is that the outside shows a two-story building but inside the reading area is surrounded by three floors.

Another incredible structure in Ephesus is the theatre which was built during the reign of Lysimachos during the 3rd century BC. It was used for plays, political and religious discussions. Gladiators fought in this arena and walking through the ancient city of Ephesus was truly extraordinary. The site is so well preserved that it’s easy to imagine today how they lived there in the past. Up in the hills around 4 miles away from Ephesus in the House of Virgin Mary, it’s a small chapel in Bulbul mountain, built on foundations of a humble dwelling where Hazrat Maryam RA was believed to have spent her last days. I left a prayer in the form of a burning candle, as it was customary to the place. I believe that you don’t have to belong to a particular religion to appreciate this serene setting. Kusadasi will always have a very special place in my heart because I celebrated my birthday on the edge of the Aegean Sea; it was a memorable moment for me.

Next, we embarked to discover Antalya, a city overflowing with history, culture, flowers and friendly faces. It was pretty inspiring to walk over the same roman walkway, which Hadrian once took. I witnessed the deep grooves created by the countless carts that must have passed through the city gate. Our guide told us about its history and that it was made for Hadrian namesake, when he visited the city in 130AD.

Throughout my trip I was super excited to visit Konya, regarded as the heart of Turkey, a city of a million souls and an endless prairie. Then, we made our way to the tomb of HazartMolana Rumi, who was a mystic, a Sufi saint who loved all religions and whose own religion was love. I would not be amazed if you lose yourself like I did as in trance and dance, sometimes spinning like tops for hours on end. This is Turkey’s second most-visited tourist attraction after the Topkapi Palace. Here you join the awestruck, the curious and the fervent walls that are embroidered with calligraphy and the ceilings give a beautiful kaleidoscopic effect. Moulana Rumi’s tomb is covered in a vastly embroidered cloth of gold and seems to radiate light, peace and mercy. Some people weep here silently, some laugh out loud, people who meditate for hours on end, and people who hurry through. All are moved here for love. I believe it’s very true when people often say that Come to Konya and you come to Turkey’s soul. In Rumi’s words: “Whoever you may be, comeEven though you may bean infidel, a pagan, or afire worshipper, comeour brotherhood is not one ofdespairthough you have brokenyour vows of repentance a hundredtimes, come”. I can still hear that sound playing inside the tomb, quietly and insinuating itself into our consciousness like a reed flute, it is really the sound of fire, which rises and falls inside us our hearts ,it’s soul music.

After paying a tribute, we continued our road trip from Konya to Cappadocia covering almost 224 kilometers we reached Cappadocia at 9pm in the evening. We dragged our luggage to the hotel room as we were exhausted after traveling from Antalya to Cappadocia within a day but when I saw the landscape, the rock colors

and vivid formations made by nature’s force chipping away for thousands of years, it was well worth it. I loved the cave hotel’s hospitality and amazing food.

On the last day what I saw made me stand transfixed, for the first time in my life watching little flurries of snow falling, with perfect synchronization making a thick comforter on the roofs. I would not have experienced it if I weren’t in Cappadocia at that time. It was one of the best moments of my life! We missed our hot air balloon ride due to snow but I guess the view of Cappadocia’s unsymmetrical caves covered with snow made up for it. Nevertheless, a hot air-balloon ride still remains on my bucket list. From Cappadocia, I flew back home with a backpack full of wondrous memories and incredible experiences, which I will always cherish. I can not wait to go visit again to the home of breathtaking architecture, some of the warmest and most genuinely hospitable people I have come across in my life, I miss you Turkey!

(The writer is studying law at University of London, her email: zaniub.gillani@gmail.com)