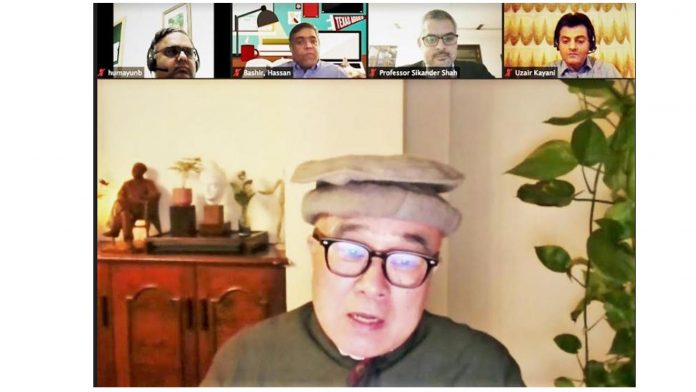 Lahore, 15 March 2021: The Centre for Chinese Legal Studies (CCLS) at the Shaikh Ahmad Hassan School of Law at LUMS recently organized a virtual conference on the topic of‘China-Pakistan Collaboration. in the 21st Century.

Attended by LUMS students and faculty, the purpose of this conference was to highlight the collaborative efforts of Pakistan and China moving forward, in light of recent partnerships in cases such as China-Pakistan Economic Corridor (CPEC) and the Belt and Road Initiative (BRI).

The conference started off with introductory remarks by the moderator, Professor Sikander A. Shah, Director, CCLS, who introduced the panelists and contextualised Pak-China collaboration to set the foundation for the rest of the talk. Professor Shah focused on the importance of China as a strategic ally to Pakistan in all aspects of foreign policy. He explained that the conference is very timely as CPEC is entering into a new phase and thus, it is important to further study and unearth new opportunities for Pak-China collaboration.

Dr. Bashir touched upon various subjects in Comparative Political Theory including the idea that Western Political Theory has historically been about the West, but the recent rise of China in the global order has made it impossible for the West to ignore the East any longer.

Prof. Xiguang talked about the history of Pakistan and its deep links with China for thousands of years. Providing a historical perspective to this relationship, Prof. Xiguang pointed out that China learned Buddhism from the land that is now modern-day Pakistan.

Mr. Syed focused on how CPEC will affect the future of Pak-China relations and what hurdles still stand in the way of Pakistan fully benefitting from CPEC. He prioritized the creation of Special Economic Zones (SEZ) and their future potential, but also raised questions about whether Pakistan was ready to commit to the daunting task of making the most out of these economic zones.

Prof.Kayani discussed the economic dimensions of Pak-China cooperation. By way of comparison between Pakistan and China, he pointed out how Pakistan can benefit from China’s experience.Dr. Bashir presented the various possibilities for mutually beneficial collaboration between the two countries in the field of medicine.

The conference included prominent audience members such as the Acting Dean of the Shaikh Ahmad Hassan School of Law, Dr. Sadaf Aziz. The conference also received positive feedback from the participants and served as a constructive discourse on Pak-China collaboration that is becoming more relevant each day.