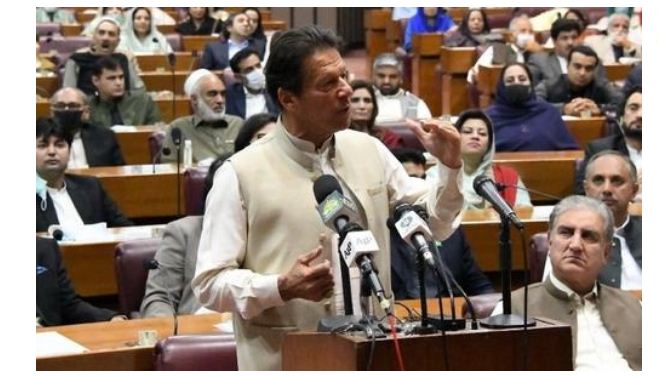 ISLAMABAD, MAR 6 – In a show of strength, Prime Minister Imran Khan secured 178 votes – six more than required – on Saturday to win the vote of confidence from the National Assembly.

The special session was called after the premier voluntarily sought a trust vote following an upset in Senate elections. Addressing the assembly after his win in a wide-ranging speech, the premier said “no one can stop Pakistan’s progress”.

He also announced electoral reforms, saying: “We are doing things; we are fully engaged with overseas Pakistanis so they can cast votes, and secondly, we are bringing electronic machines.”

“We are bringing this system so that the one who loses, accepts defeat.”

The premier needed 172 votes to win the confidence vote. Announcing the result, NA Speaker Asad Qaiser said Prime Minister Imran had been elected to the post with 176 votes eight years ago. “Today, he has secured 178 votes,” he said.

According to the breakdown, 155 PTI lawmakers voted in favour of the premier.

Besides, seven lawmakers from the MQM-P, five each from the Balochistan Awami Party and the Pakistan Muslim League-Quaid, three from Grand Democratic Alliance and one each from the Awami Muslim League and the Jamhoori Watan Party cast their votes supporting the prime minister.

Independent candidate Aslam Bhotani also reposed confidence in the premier through his vote.

Addressing the House after securing the trust vote, PM Imran thanked government lawmakers, including his allies, for staying by his side through thick and thin.

He commended the way his party reacted after the Islamabad Senate seat upset, saying that this experience had made them tougher.

“To my parliamentarians and team, I thank you. Yesterday evening when I saw you, I realised that you were really hurt when we lost the Senate election of Hafeez Shaikh.

“But when I saw you, I felt very good because I saw a team in you and our team will get stronger. Because God will test your faith again and again,” the prime minister said.

The premier said he knew of many individual MNAs who tried hard to attend the vote today but could not make it as some were facing health issues. “I thank all of you,” he said.

PM Imran said it was embarrassing the way elections were held in Pakistan. He named PPP co-chair Asif Ali Zardari and PML-N supremo Nawaz Sharif, saying they were “thieves” who were blackmailing his government for an NRO.

He said Zardari was commonly referred to in phrases such as “one Zardari trumps all (aik Zardari sab pe bhaari)” and “Mr 10 per cent” because of his corrupt practices.

The PM further said that Sharif had faked sickness to go abroad so that he could avoid the legal consequences of his corruption and theft.

“These people even tried to sabotage FATF legislation and had linked passing of the FATF legislation to amendments in the NAB law,” the PM said, adding that they had put the country at stake to get rid of corruption cases against them.

He criticised Yusuf Raza Gilani, who beat PTI’s Hafeez Shaikh in the recent Senate polls, as one of the most corrupt politicians in the country.

“Just look at his [Gilani’s] wealth and assets before he became the PM and do a comparison with his assets after he became the PM. The picture will be clear,” Imran said.

He said future generations of the country can only be saved if the menace of corruption is removed.

“We are on a way to economic recovery. The current account is improving constantly and now even the rupee is strengthening against the dollar without government intervention,” he said.

The PM said the biggest pressure he was facing was to tackle the issue of inflation, which he said was a natural result of the rupee devaluing.

“But my team and my government is doing everything it can to control this issue and we will keep working,” he said.

Immediately after announcing the result, the speaker gave the floor to Amir Liaquat, who recited poetry as an ode to Imran Khan. After him, MQM’s Khalid Maqbool Siddiqui took the floor and congratulated the premier on his success.

“You got the confidence [of the House], now it is your turn to return that confidence to the nation,” Siddiqui said, asking the premier to fulfill his promises to his party and the country.

Following Siddiqui, Fehmida Mirza spoke, saying that the government’s allies would always stand with the premier whenever there was a threat to the continuity of democracy despite any grievances they might have.

Mirza then went on to criticise the way in which the recently concluded Senate elections were held, questioning whether the Election Commission of Pakistan was able to guard the process against “corrupt practices”.

Earlier, lawmakers, including PM Imran, arrived at the Parliament House while PTI supporters and PML-N leaders gathered outside.

Tensions were high as both sides became confrontational and PML-N leaders alleged they had been manhandled.

According to the participants of the meeting, the prime minister has “set a unique trend”. The chief ministers, senators and other high-ranking officials watched the session from the galleries.

The session started at 12:15pm with recitation from the Holy Quran and a naat without the opposition in attendance. Later, the national anthem was played in the House at which all lawmakers stood up in respect.

Following this, Foreign Minister Shah Mahmood Qureshi tabled the resolution on which voting will be held and the NA speaker read out rules on how the voting will be conducted. Later, bells were sounded inside the House so that all lawmakers outside the premises could make their way inside after which the doors were sealed.

After reading out the resolution, the speaker directed the legislators who wanted to caste their votes to make their way to another chamber inside the House, where NA staff recorded their votes.

PM Imran had announced earlier this week that he would seek a vote of confidence from his party’s lawmakers, following an upset in the Senate election on March 3. While the ruling PTI made gains, it experienced a shocking upset on the Islamabad seat where PPP’s Yousuf Raza Gilani bagged 169 votes, defeating the government’s nominee, Hafeez Shaikh, who received 164 votes, meaning that several ruling alliance MNAs had voted for the Pakistan Democratic Movement candidate.

This is the first time a prime minister has undertaken such an exercise after the passage of the 18th Amendment.

Prior to this, the law required every prime minister to take a vote of confidence from the Assembly within 30 days of being elected — a vote that Benazir Bhutto, Nawaz Sharif and other prime ministers of the past had to seek after their election.

Since 2010, however, the law does not require such a practice. In fact, according to clause 7 of Article 91 of the Constitution, the president “shall not exercise his powers under this clause unless he is satisfied that the prime minister does not command the confidence of the majority” in the Assembly.

KOREAN COMPANIES LOOKING AT PAKISTAN AS A POTENTIAL DESTINY, ENVOY