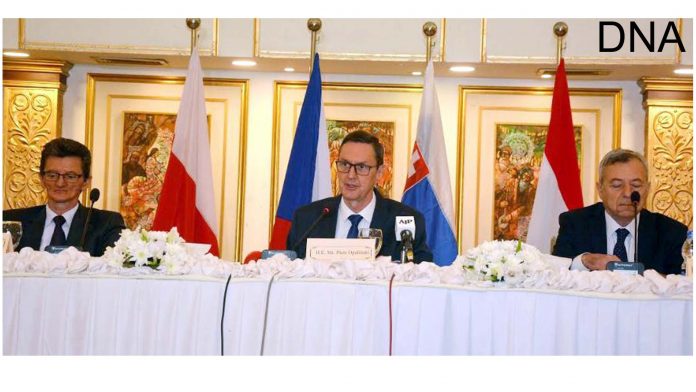 ISLAMABAD: Ambassadors of Poland, Hungary and Czech Republic gathered on Monday to share experience of Visegrad cooperation on the occasion of the 30th anniversary of the alliance. Spearheaded by Piotr A. Opalinksi, the Ambassador of Poland, the event provided the audience with first hand information about the four-country alliance. Slovakia is also part of the alliance however there is no Slovak embassy in Islamabad. Antonin Hradilek, the Deputy Head of Mission represented the Czech embassy.

Ambassador of Poland Piotr A. Opalinksi in his remarks highlighted the significance and relevance of the alliance. He said thirty years ago, on 15 February 1991, the presidents of Poland and the Czech Republic, and the prime minister of Hungary signed the Declaration on Cooperation between the Czech and Slovak Federal Republic, the Republic of Poland and the Republic of Hungary in Striving for European Integration in the castle of Visegrad, Hungary.

The Ambassador said, the Declaration provided political framework for extensive cooperation between Poland, Czechoslovakia, and Hungary, and brought closer the societies of the three, and later four, countries. The original aim of cooperation was the striving for the full recovery of the states’ independence, democracy and liberty, eradication of symptoms of totalitarian regimes, construction of parliamentary democracy, respect for human rights and fundamental freedoms, establishment of free market economy, comprehensive participation in the European political and economic system, as well as the security and legislative system. The accession of our countries to the North Atlantic Treaty Organisation and later joining the European Union, symbolically closed this first stage and opened new perspectives for the Visegrad cooperation.

Today, besides friendship and good neighborly cooperation, the Visegrad Group countries are also united by the awareness of common social and economic challenges, understanding the value of regional solidarity, and the willingness to realise common goals of both European and foreign policy, he added.

From a 30-year perspective, the Visegrad Group became not only one of the symbols of the new united Europe and a successful political and economic transformation of the countries of the region, but also an example of effective format of regional cooperation within the European Union which contributes to the shaping of European policies and enhancing its economic competitiveness.

Ambassador Piotr furher said, V4 is not only about political cooperation. One of emblematic institutions of our cooperation is the International Visegrad Fund which, since its establishment in 2000, has granted nearly 2400 scholarships and supported almost 6000 projects by NGOs, local governments, scientists and artists, mainly across our four countries, but also in the Eastern Partnership and Western Balkan states.

We are pleased that the Visegrad Group’s anniversary coincided with Poland’s presidency of the Group from July 2020 until June 2021, the ambassador added. The Polish ambassador on the occasion recited a few verses form Allam Iqbal poetry in Urdu. Ambassador Piotr is fluent in Urdu language as he has spent over 12 years in Pakistan.

The ambassador hoped that once the pandemic is over we can seem business activity between the two countries. He hoped post-Pandemic era will see enhanced tourism activity also.

Ambassador of Hungary Bela Fazekas also spoke on the occasion. Ambassador Fazekas is in Pakistan for second time. He served as Hungarian ambassador in Pakistan almost 15 years ago also.

The ambassador dilated upon the alliance and shed light on the role Hungary was playing within the alliance. Replying a question the Hungarian ambassador said Hungary had offered 200 scholarships to Pakistani students. He shared with the audience information that for these 200 scholarships over 9,000 students appeared in a test, which shows their keen interest in the scholarship programme.

Regarding CPEC the all three envoys were unanimous that CPEC was included in the areas of interest of these countries and they had been following developments keenly.

Antonin Hradelik, Deputy Head of Mission of Czech embassy told that pandemic had hit his country also hard however as regards student visas the embassy was still issuing visas to students.