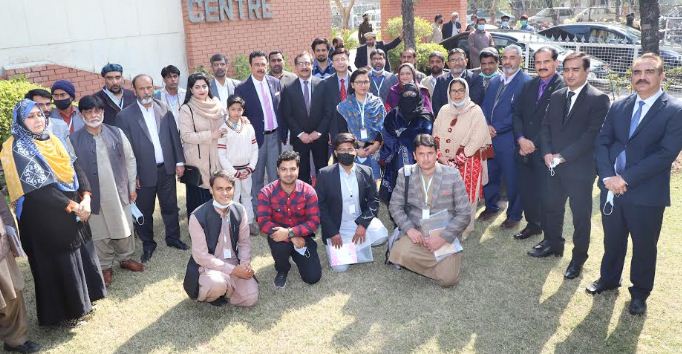 The participants of the workshop include 25 selected Library professionals belong to AJK, Balochistan, GB, Federal, KPK, Punjab and Sindh.

Empowering Library Professionals on ICT Skills for development of Pakistan competence in information handling and producing an adequate corps of information scientists is one of the main objectives of PASTIC.

PASTIC National Science Reference Library (NSRL) is a network/consortium of S&T/R&D Libraries of Pakistan cooperating and collaborating to provide access of their holdings to the bonafide users throughout the country.

The Consortium facilitates the scientific community by sharing of scientific information resources among S&T Libraries of Pakistan along with the capacity building (Trainings) of library professionals to cope with the modern challenges of digital era. Under the consortium various scattered indigenous R&D information resources (available in S&T libraries) has been centralized in PakCat (Online Union Catalogue of Consortium Libraries with Federated Search) along with a Digital Repository (Full Text Journal Articles/Theses/Reports etc) and a free digital solution (Koha software) for Automation of 150 Consortium Libraries.

In the inaugural address, Prof. Dr. M Akram Shaikh highlighted the role of PASTIC S&T information services since its inception to support and promote science and technology in the country. He elaborated that PASTIC regularly organize trainings for researchers, scientist and technologist on various ICT based research tools/techniques at its national centre as well as all the six sub-centre at Karachi, Lahore, Faisalabad, Peshawar, Quetta and Muzaffarabad.

Vice Chancellor Quaid-e-Azam University, Prof. Dr. Muhammad Ali Shah in his remarks acknowledged the significant role played by PASTIC to support research and development in the country and highlighted the need to strengthen PASTIC various databases and provision of online information services to fulfill the current needs of the scientific community.

Chairman PSF appreciated the PASTIC role in restructuring and revamping of national libraries for S & T development in the country.

He advised the workshop participants to get full benefit of this opportunity and become the future leaders and play their role as experts when go back to their province.

He also offered them financial assistance from PSF if they want to organize similar activity in their region.=DNA