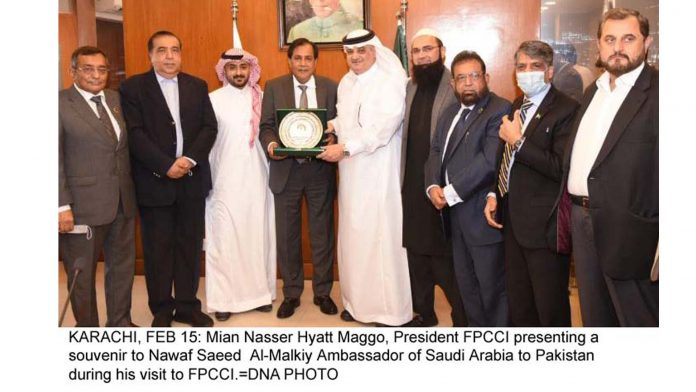 KARACHI, FEB 15 (DNA) – Pakistan has strong strategic, diplomatic and economic relations with Saudi Arabia and Pakistan cannot forget the financial assistance of Saudi Arabia in the form of oil, construction of educational institutions and on Kashmir cause; this was stated by Mian Nasser Hyatt Maggo, President of the Federation of Pakistan Chambers of Commerce and Industry (FPCCI) in a meeting with Nawaf bin Said Al-Malki, Ambassador of Saudi Arabia in Pakistan who visited FPCCI along with Nahar Abdulaziz Almugbel, Commercial Attache of Saudi Arabia.

While welcoming the Ambassador, Mian Nasser Hyatt Maggo, President FPCCI stated that Saudi Arabia is an important trading partner of Pakistan but there is no trade agreement between two countries and trade between both countries held on the basis of MFN tariff rate applied to all members of WTO. While quoting the statistics, he informed that the share of Pakistan in Saudi Arabia’s trade is just 1 percent; while in Pakistan’s trade is approximately 7 percent.

The reason for this minuscule share is mainly unawareness, and a non-aggressive marketing of Pakistani products. He emphasized on the activation of Joint Business Council between two countries whose agreement was signed in 2000 and since then, only three meetings were organized. He also underlined the need of exchange of delegations, holding of B2B meetings and exhibitions.

In his remarks, H.E. Nawaf bin Said Al-Malki, Ambassador of Saudi Arabia underscored the need of removal of trade barriers and promotion of trade through direct route.

He stated that Pakistan and Saudi Arabia both posses huge natural resources which can be utilized for enhancement of bilateral relations. He also informed that there is huge potential in rice, textile, sea food, sports goods, agro-based products and there is a need of direct interaction between the traders of both countries in these commodities. Mr. Nahar Abdulaziz Almugbel, Commercial Attache of Saudi Arabia also emphasized on the enhancement of bilateral trades and investment.

During the meeting, the members of Pakistan Saudi Arabia Business Council also highlighted the issues related to imposition of ban on exports of shrimps from Pakistan.

The members also suggested holding of Biryani Festival regularly in Saudi Arabia and enhancement of overseas employment for Pakistani workers in Saudi Arabia on the same terms and condition prior to COVID-19.=DNA