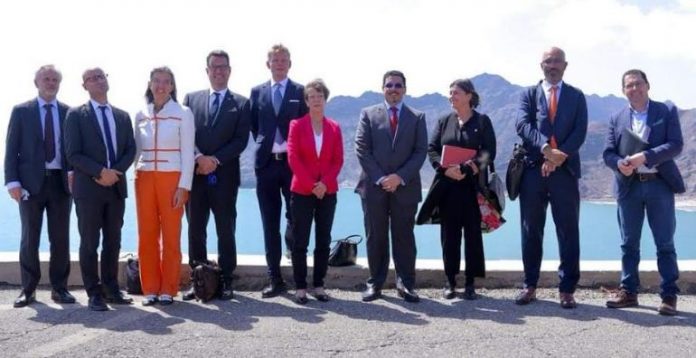 ISLAMABAD – /DNA/ – We welcome the visit of the Head of the European Union delegation and the ambassadors of Germany, Belgium, France, the Netherlands, Ireland, Finland, Sweden, and the Deputy Ambassador of Norway accredited to Yemen. This visit sends an important political message that expresses the support of the European friends to the Yemeni government in its efforts to normalize public life and to realize peace and to restore security and stability.

Today, we discussed a number of issues, and wherein we made clear that the cowardly terrorist bombing of the Houthi militia with ballistic missiles on Aden International Airport when the new government Cabinet had arrived at the airport was aimed at terminating the peace process and prolonging the war. However, the attack failed to achieve its goals, and it only increased the government’s cohesion and steadfastness to undertake its responsibility to end the militia’s tampering with the security and stability of Yemen; and to put an end to its criminal behavior and the never-ending violations on the rights of the Yemeni people.

We illuminated how the Riyadh Agreement was a significant historical event for renewing hope for a better future and affirming that the approach of dialogue and reconciliation is the most effective way to resolve differences and to defuse the conflict, and that the constructive political atmosphere prevailing in the interim capital Aden, will positively reflect on the government’s performance and enable it to focus on improving public services as an urgent priority.  And we will continue to work with our brothers in the Kingdom of Saudi Arabia to complete the implementation of the Riyadh Agreement.We touched on the issue of the Safer oil tanker and explained that the Houthi militia continues to recant from its commitment to allow the international technical team to access the tanker so as to assess its condition, as they had agreed.

It is another indication to the international community of the importance of exerting maximum pressure on the Houthi militia in dealing with their methods of manipulation and deception used, which is also a reason for protracting the war and impeding in reaching a political settlement in Yemen, despite all the concessions made by the government in all rounds of negotiations undertaken with the Houthi militia.We affirmed that the government is moving towards a comprehensive national reconciliation and in a political partnership with the international community, to establish the necessary foundations to achieve a real, lasting and comprehensive peace in Yemen, stressing peace is the only way to solve the political crisis in Yemen and to address the catastrophic humanitarian repercussions.

During this visit, the ambassadors met with the Their Excellencies the Prime Minister, the Minister of Planning and International Cooperation, the Minister of Legal Affairs and Human Rights, the Minister of Finance and the Deputy Governor of the Central Bank.The ambassadors were briefed on the government’s directions regarding its plans in the next six months to improve living conditions and the provision of basic services, as well as the most important features of the government’s general course of actions. Also discussed were issues related to humanitarian aid and the government’s efforts to facilitate humanitarian work in Yemen as well as the overall economic situation in Yemen.An agreement was also signed between the Republic of Yemen and the Republic of France to postpone the payment of debts in accordance with the joint agreement between the G20 and the Paris Club on April 15, 2020.