ISLAMABAD, JUL 15 (DNA) – Foreign Secretary Sohail Mahmood said on Monday that three years ago brave Turkish citizens from all walks life and across the political spectrum wrote an illustrious chapter of great courage bravery by thwarting a deadly coup, which will be remembered in the annals of history forever.This stage is a reminder of a triumph of human courage and perseverance against all forms symbolized by the brave Turkish people for the unity, peace and prosperity of their homeland.

He expressed these views on the occasion of the Democracy and National Unity Day held at the Turkish embassy. A large number of people hailing from various walks of life and members of diplomatic corps attended the ceremony.

Ambassador of Turkey Ihsan Mustafa Yurdakul also spoke on the occasion and shed light on the importance of the day. 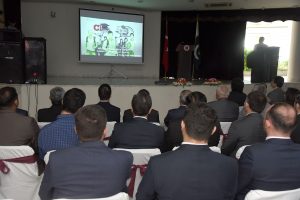 Foreign Secretary Sohail Mahmood further said Pakistan reiterates its unwavering support to the brotherly government and people of Turkey. It symbolizes the same spirit that motivated our forefathers to feel the pain of Turkish nation as their own at the time Turkish nation fought for its independence, he added.

He said, the warmth with which the Turkish nation responded to Pakistan’s goodwill gestures and sentiments in fact has no parallel in the history of inter-state relations.

The ever growing ties between the two countries ever since the independence of Pakistan remain a testimony to the fact that our countries have inherited the spirit of our forefathers.

Ambassador Sohail said we are proud of the fact that Pakistani government and people stood by our brothers and sisters on July 15, 2016 and Pakistan was one of the first countries to strongly condemn the heinous coup attempt and express its unwavering solidarity with the government of Turkey.

He said both houses of Parliament passed unanimous resolutions condemning the gruesome coup attempt and expressing solidarity with the Turkish people.

Pakistan will continue to provide all possible support to Turkish government and Turkish people to overcome all challenges including FETO.

While speaking about Pakistan, Turkey bilateral relations the Foreign Secretary said both countries enjoy exemplary ties based on mutual trust and understanding.

He said Pakistan was happy to see Turkey making progress by leaps and bounds. Even on humanitarian front, both countries are cooperating with each other closely.

Both Pakistan and Turkey have suffered a lot at the hands of terrorism and paid huge cost in fighting scourge of terrorism. Due to sacrifices of our security forces and people both countries have successfully overcome this issue.

He said both countries will continue to stand by each other in order to secure better tomorrow for our peoples.=DNA