ISLAMABAD, JUL 15 (DNA) – Ambassador of Turkey Ihsan Mustafa Yurdakul said on Monday three important years have passed since the 15th of July coup attempt carried out by the FETO terrorist organization.This 15th of July coup attempt was planned by the FETO leadership and carried out by members of the organization, whom infiltrated into our army by disobeying the chain of command of the armed forces.

He expressed these views on the occasion of the Democracy and National Unity Day held at the Turkish embassy. A large number of people hailing from various walks of life and members of diplomatic corps attended the ceremony. 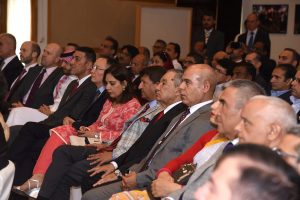 The Turkish ambassador further said the heinous act constituted the deadliest terrorist attack that Turkey has ever experienced.

“We have never before witnessed such savagery and treachery in our history as the one exhibited by the perpetrators of this coup attempt: our Parliament Building, the Presidential complex, the building of the National Intelligence Organization (MIT), buildings of the Turkish National Police, the Headquarters of the Police Special Operations Department located in Ankara were bombed by rogue pilots”.

While giving an account of what happened on July 15 the ambassador said Tanks were driven to the streets to mow down innocent civilians, while helicopters and jets dropped bombs from the air and shot everyone in sight. That night, two hundred and fifty one citizens were killed and more than two thousand people were injured.

He said, by brainwashing young minds at schools founded under the disguise of so-called training activities, they indoctrinated a large group of radical followers, who carried out the instructions of the organization’s leadership unquestioningly and violated all legal and moral norms.

Graduates of these schools were able to infiltrate the most critical institutions of the State by stealing exam questions; furthermore, those considered as an obstacle to the organization were treacherously eliminated as FETO conspired against them.

FETO strengthened its economic and political influence by abusing the State’s resources and authority for the vile interests of the organization. On the 15th of July, we were able to grasp the sheer size of the secret structure established by FETO within our most critical institution, the Turkish Armed Forces.

Ambassador said in the past three years, the fight against FETO both inside and outside Turkey has constituted one of the main priorities of our State. Within Turkey, our efforts are being conducted under three pillars:  a) Firstly, on the basis of the rule of law, the perpetrators of the 15th of July coup attempt have been brought to justice.  b) FETO’s organizational structure within governmental institutions has been unveiled; administrative and judicial procedures have been initiated against its members and hence the “parallel state structure” has been brought down.

As these developments took place, FETO has undergone a significant transformation. The organization, which lost its backbone in Turkey, is now trying to survive by making use of its structure abroad. Thus, fighting against the structures of FETO abroad has gained significance.

The fight against FETO structures abroad has been among the top priorities of the Turkish Ministry of Foreign Affairs.

He said the main objective of our efforts was to demonstrate and prove the fact that FETO also poses a threat to the security of other countries where it remains active.

In this regard, the concrete examples gathered indicate that FETO does not hesitate to violate laws by acting almost like an secretive intelligence service and points out to the fact that it aims to establish political and economic zones of influence that permits the creation of structures similar to those in Turkey in other countries that it has spread to since the 1990s.

He said they had taken administrative measures and initiated legal proceedings to limit the maneuvering space of the FETO terrorist organization abroad and to prevent its members from transferring money and escaping justice.

“Within the scope of investigations conducted in Turkey, we have requested the extradition of the main ringleaders of the structures of FETO abroad from the countries where these persons are located”.

The Turkish Maarif Foundation, he said, maintains its activities all around the world to prevent any shortfalls resulting from the steps taken against FETO, especially in the field of education. In this vein, the stand of the brotherly Pakistan’s governments and institutions as well as their assistance for us to take over those schools were outstanding.

Most importantly, the international community gradually understands that FETO is not a social movement that engages with education and charity, contrary to the way it tries to portray itself, but rather a dark and insidious organization with political and economic ambitions. A clear awareness regarding the characteristics of the organization has developed among public opinions abroad.

The ambassador told that various countries and international organizations have declared FETO as a terrorist organization.

In this context, FETO was declared as a terrorist organization in the 43rd session of the Council of Foreign Ministers of the OIC held on 19 October 2016; a similar resolution was written at the Asian Parliamentary Assembly on 1 December 2016 and ratified at the 12th Conference of the Parliamentary Union of the OIC on 27 January 2017. In addition to the Turkish Republic of Northern Cyprus, the Supreme Court of Pakistan declared FETO a terrorist organization with the verdict rendered on 28 December 2018.

The awareness raised regarding FETO in third countries has also stimulated closer monitoring and investigation of the activities related to these elements by the officials of the aforementioned countries. Unlawful acts carried out by FETO-affiliated organizations have thus been revealed in various countries. The members of the organization have been deported accordingly.

In addition to those deported to third countries, more than one hundred and ten FETO members from over twenty countries have been extradited to Turkey.

“Our efforts for fully eliminating the structures of FETO abroad constitute a long-term fight. The Turkish Government will resolutely maintain its efforts in that regard”, the ambassador added..DNA