PARIS, (DNA) – French and foreign visitors were introduced to Pakistan’s cultural heritage and traditional cuisine at the well decorated Pakistan Pavilion at the 7th Edition of Diplomatic Garden Party organized by the Lettre de la Diplomatique as part of French National Day celebrations in Paris yesterday.Ambassadors and diplomats of many countries, and large number of French visitors visited the Pakistan pavilion and enjoyed the Pakistani cuisine and appreciated the cultural displays. 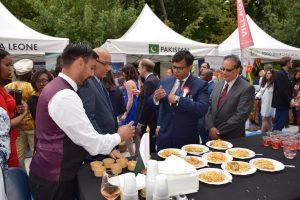 The Ambassador of Pakistan to France Mr. Moin ul Haque who inaugurated the Pakistani pavilion said that Embassy’s participation was part of its Public and Cultural Diplomacy initiative. He said that through this event we were also promoting Pakistan as a preferred tourist destination

The Diplomatic Garden Party is an annual event organized by the Lettre de la Diplomatique to provide an opportunity to the diplomatic community to celebrate French National Day by setting up their country pavilions.