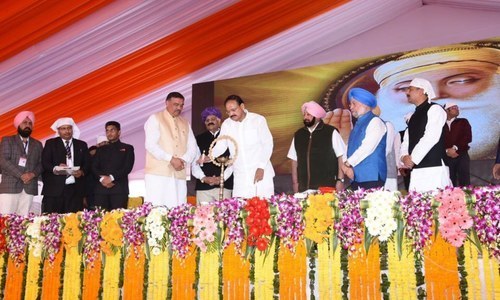 Prime Minister Imran Khan will perform the groundbreaking of the corridor — which will provide visa-free access to the Indian Sikh pilgrims to the shrine — on Wednesday [Nov 28].

“The corridor will become a symbol of love and peace between both countries,” Naidu was quoted.

“This is a momentous and historic day we are fulfilling the wish of thousands of Sikh devotees,” he said.

However, India’s Punjab Chief Minister Captain Amarinder Singh took a more confrontational tone while speaking at the event and issued a ‘warning’ to Pakistan to not “vitiate the atmosphere”.

Randhawa used tape to black out his own and other Punjab ministers’ names on the foundation stone.

“I did this in protest against Parkash and Sukhbir Badal’s names on stone. Why is their name here? They are not part of the executive, it is not BJP-Akali event,” the minister was quoted as saying.