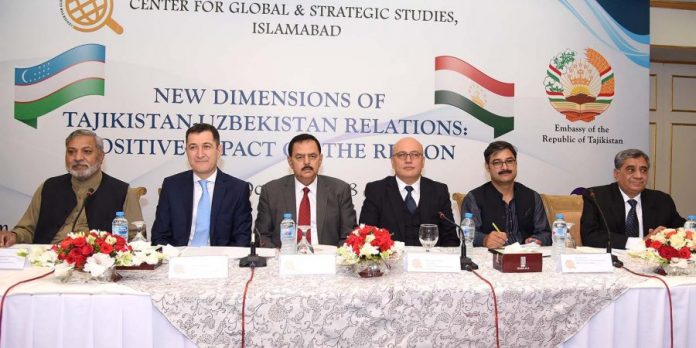 ISLAMABAD, OCT 04 (DNA) – Tajikistan and Uzbekistan have resolved to forge even deeper relations with Pakistan with a view to giving new dimensions to already close and cordial relations.Ambassador of Tajikistan Sherali Jononov and Ambassador of Uzbekistan Furqat Sidikov expressed these views while delivering key-note speeches at a seminar held under the aegis of CGSS.

The aim and focus of the Conference was to analyse the start of the thaw between Uzbekistan and Tajikistan as the relations between both the states are growing and have positive impacts on the region. The event brought together diplomats, government representatives and individuals from public and private entities.
Sherali Jononov, Ambassador of the Republic of Tajikistan deliberated upon “Tajikistan-Uzbekistan Shared Prospects for the Region”.
The ambassador made it clear that Tajikistan believes in peace and desires friendly relations with all especially the neighboring countries. He said Tajikistan and Pakistan are close friends and he wanted to make it clear that soil of Tajikistan will never be used against Pakistan or any other country.
He stated that the historical change in the bilateral relations started after the Summit in China 2018. Delegations from the countries held various meetings to discuss and promote trade, economy, culture, transport, water and security issues.
He further stated that the focus of Tajikistan is on the regional security specifically Afghanistan and beyond the region. Recently, there have been several developments in the bilateral relations of Uzbekistan and Tajikistan.
Many projects including railway, tourist flights, transport and communication and energy sector have been launched.
A total of 27 bilateral cooperation agreements have been signed in which trade mechanism has been decided through which the trade between both the states have reached to half a billion. He also stated that the human resource from Tajikistan and Uzbekistan can also be helpful for Pakistan in the future.
Furqat A. Sidikov, Ambassador of the Republic of Uzbekistan expressed his views on Pragmatic & constructive regional policy of the President of the Republic of Uzbekistan on building good neighborhood relations.
He stated that Uzbekistan and Tajikistan are connected by common history and shared culture and that the relations between both the countries are rapidly growing.
The Ambassador expressed their readiness to work together in order to bring the bilateral ties between Tajikistan and Uzbekistan to a new level for the sake of both the nations. He stated that the mutual trade turnover is growing dynamically and trade agreements of worth more than $300 million were signed and implemented so far.
The ambassador said bilateral trade between Uzbekistan and Pakistan is growing at fast speed. The annual trade volume has jumped up to 85 million USD from 35 million USD.
President Center for Global & Strategic Studies, Major General Syed Khalid Amir Jaffery HI(M), (Retd) spoke on “Role of Center for Global and Strategic Studies in Regional Connectivity: Efforts in Developing Better Relations with Tajikistan And Uzbekistan”.
He highlighted the efforts of CGSS to bring Pakistan and Central Asian Republics (CAR) especially Tajikistan and Uzbekistan together by series of meetings/visits and agreements for mutual cooperation that have been done within last two years.
He further stated that CGSS aims to become a bridge between Pakistan, Tajikistan and Uzbekistan to enhance consistent development of mutual cooperation in trade, economic and investment spheres.
Mr Ashfaq Ahmed Gondal and Mr. Adam Saud also spoke on the ocasion”. =DNA
===============

Ulemas-Mashaykh of Pakistan reject US report on religious freedom