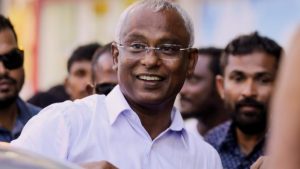 ISLAMABAD: (DNA) –  Prime Minister Imran Khan called the Maldives’ president-elect Ibrahim Mohammed Solih to felicitate him on his victory in the recent presidential elections.In a telephonic conversation on Monday, the president-elect of the Maldives invited Pakistan’s PM to visit the Maldives and hoped for better bilateral relations between the two countries.

Underscoring that the Maldives is entering a new era, PM Khan hoped that under the leadership of the president-elect Ibrahim Mohammad Solih, the country and its people would achieve great success and prosperity.

Both leaders reiterated their resolve to further strengthen bilateral relations already characterised by cordiality, religious affinity, and close cooperation. They also expressed a desire to work closely on issues of mutual interest.

The Maldivian president-elect thanked Imran Khan for the telephone call and also congratulated him on assuming the office of Prime Minister of Pakistan.

He invited the Prime Minister to visit the Maldives at a mutually convenient date. PM Khan has accepted the invitation.