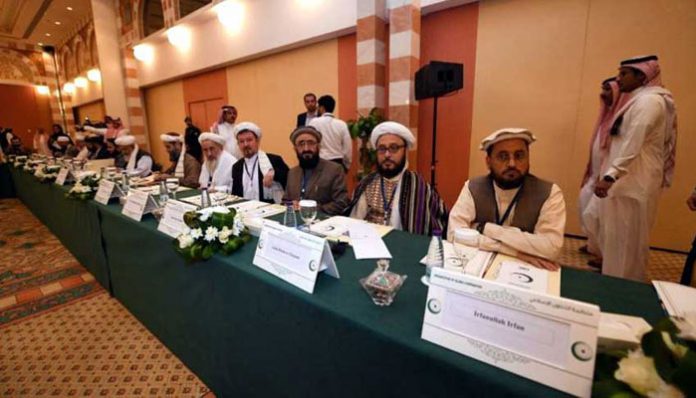 JEDDAH, (DNA) – : More than 100 Muslim scholars from around the world meeting Wednesday in the Saudi holy city of Mecca issued an urgent appeal for peace in Afghanistan as they ended a two-day conference.”The solution to the cause of the Muslim Afghani must particularly go through mutual understanding and direct peaceful negotiations,” read the closing declaration.

“Reconciling between battling Muslims is one of the greatest and most honoured acts of worship,” it said.

The international gathering, which focused on prospects for peace in Afghanistan, was sponsored by the Organization of Islamic Cooperation, based in nearby Jeddah.

Yousef al-Othaimeen, the head of the 57-member pan-Islamic organisation, ended the meeting by urging a ceasefire for Afghanistan.

“The OIC calls on all parties to observe a truce, respect a ceasefire and enter into direct negotiations,” he told reporters at the close of the conference.

The scholars were received on Wednesday by Saudi King Salman, who expressed his country´s committment to a peaceful resolution in Afghanistan.

The Taliban ignored an invitation from the OIC to attend the Mecca conference, Saudi daily Asharq al-Awsat reported Wednesday.

Thus far, the Taliban has not responded to Afghan President Ashraf Ghani´s offers for dialogue, instead demanding to sit down with the United States, which has dismissed this proposal.

Attacks occur on a near-daily basis in Afghanistan, where the US toppled the Taliban from power 17 years ago. On Wednesday, an unclaimed attack on an education department facility in eastern Afghanistan left at least 11 people dead.

A recent ceasefire between Afghan security forces and the Taliban during the Islamic holiday Eid had raised hopes that an end to hostilities in the war-weary country was possible.

But the Taliban refused the government´s request to extend their three-day ceasefire, launching attacks that have seen scores killed or injured.