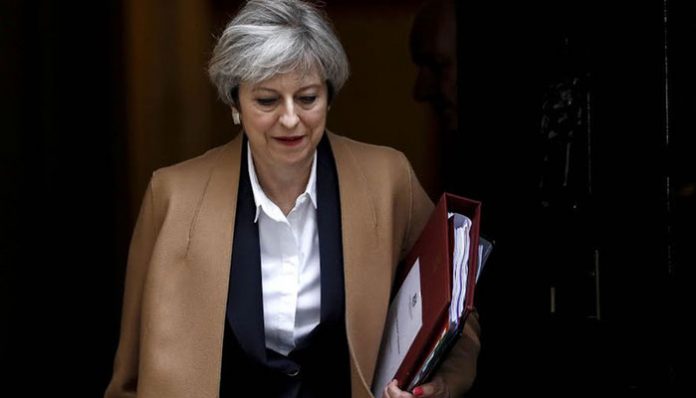 LONDON: (DNA) – British Prime Minister Theresa May chaired a meeting of her new-look cabinet on Tuesday as she clings to power following the resignation of her foreign and Brexit ministers in protest at her strategy for leaving the European Union.May has faced a backlash over the plan from Brexit hardliners in her Conservative Party who say it gives too many concessions to the EU, but she has support from moderates and there has been no challenge to her leadership.

Former foreign minister Boris Johnson, who wrote in his resignation letter that the Brexit “dream is dying” and that Britain was headed for the “status of colony” of the EU under May´s leadership, is seen as a potential challenger.

Rumours have swirled over possible further resignations but experts said May appeared to have weathered the crisis for now.

“My impression is that this is probably as far as it goes. I can´t see more ministers resigning,” Simon Usherwood, politics lecturer at the University of Surrey, told.

The gaffe-prone Johnson was quickly replaced by 51-year-old former health minister Jeremy Hunt, who unlike Johnson supported staying in the European Union in the 2016 referendum.

Dominic Raab, a Brexit supporter and former housing minister, was appointed to replace Davis only days before negotiations in Brussels are due to resume next week.

Hunt said it was a moment to show that Britain remained a “strong, confident voice in the world”.

He said he would “stand four square behind the prime minister so that we can get through an agreement with the European Union based on what was agreed by the cabinet last week at Chequers”.

The plan agreed at May´s country retreat at Chequers would involve Britain pursuing a “UK-EU free trade area” for goods that would involve regulatory alignment with the EU.