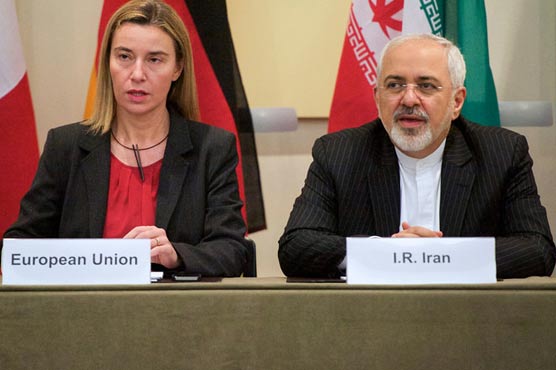 TEHRAN, MAY 15 (DNA) – Iran s foreign minister said Tuesday that efforts to save the nuclear deal after the abrupt US withdrawal were “on the right track” as he began talks with European powers in Brussels. Mohammad Javad Zarif met EU foreign policy chief Federica Mogherini ahead of evening talks with his counterparts from Britain, France and Germany — the three European signatories to the 2015 landmark deal who are scrambling to preserve it.

Tehran has warned it is preparing to resume “industrial-scale” uranium enrichment “without any restrictions” unless Europe can provide solid guarantees that it can maintain the economic benefits it gained from the nuclear agreement despite the United States reimposing sanctions.

Zarif gave an upbeat assessment after a “good and constructive” meeting with Mogherini.

“I believe we re on the right track to move forward in order to ensure that interests of all the JCPOA remaining participants, particularly Iran, will be preserved and guaranteed,” he told reporters. The deal s official name is the Joint Comprehensive Plan of Action, or JCPOA.

But European diplomats have sought to play down expectations of Tuesday s meeting, stressing the enormous challenge of finding a way around US sanctions punishing foreign businesses trading with Iran, which have global reach.

“There is no one magic solution — there will be a complicated, comprehensive series of options at both the EU and national level, therefore it will take some time,” a senior EU official said.

The European Union insists the deal is working, pointing to repeated UN inspections verifying the Islamic republic s compliance with its side of the bargain, and Mogherini s spokeswoman Maja Kocijancic told ahead of Zarif s arrival that “we must do our utmost to preserve it”.