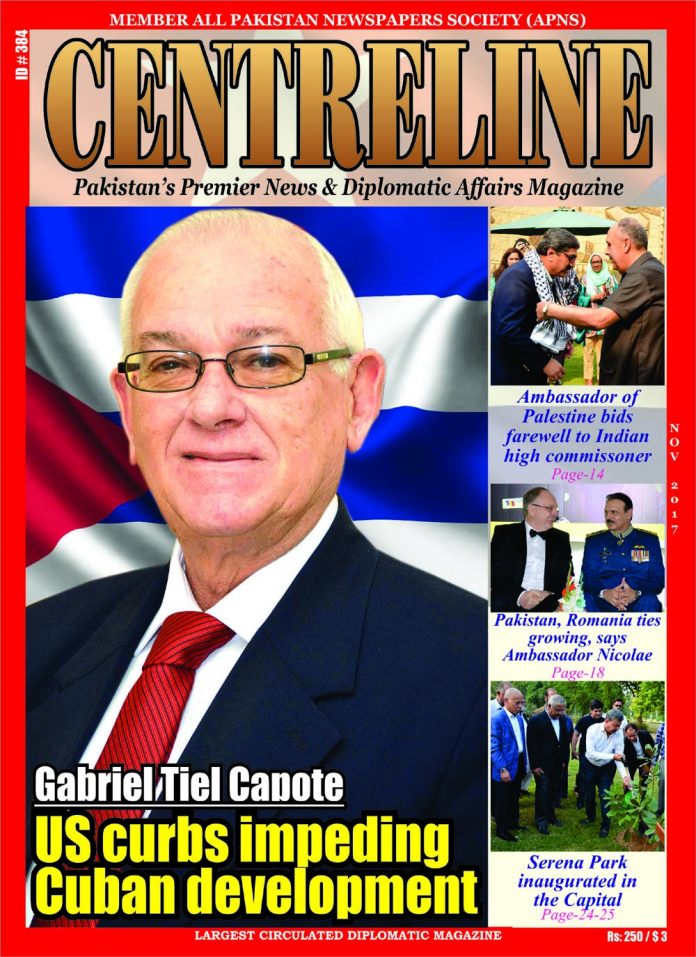 Please tell us about US embargoes on Cuba. What is the current situation? I think it is firstly necessary to explain how and when the blockade arises and the reasons why it was implemented.On January 1st, 1959, the revolutionary struggle against the Cuban dictatorial regime ended victoriously. The revolutionary movement led by Fidel Castro acceded to power.The measures adopted by the Revolutionary Government to recover the Cuban wealth and destine it to the people constituted a mortal blow to the interests of the biggest North American monopolies which had plundered Cuban resources for more than half a century, and dominated the country. 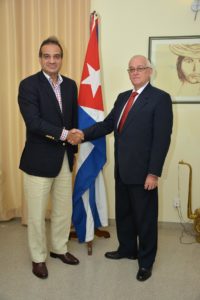 The new authorities resolute will to act with total independence and to produce decisive economic and social changes in favor of the majority, constituted the detonating fact that reactivated the historic dispute between both countries.

The United States response was fast and abusive from the first moment. The sanctions directed to fold the Revolution followed one after the other. It became a total blockade, an economic war the United States had imposed against Cuba.

The latest and current situation is as follows, and I will refer on the Cuba’s Report on the Blockade of 2017:

The economic, commercial and financial blockade imposed by the Government of the United States against Cuba for almost 60 years still persists, continues to cause suffering to the Cuban people and obstructs the economic development of the country. The purpose of this Report is to summarize the negative impacts resulting from the implementation of this policy from April 2016 to June 2017.

On June 16, 2017 the US President, Donald Trump, signed the National Security Presidential Memorandum on Strengthening the Policy of the United States toward Cuba”. This directive establishes a new policy that proclaims one of its main objectives as tightening of the blockade against the Island.

President Trump also announced the adoption of new coercive measures against Cuba and the reversal of others that were adopted by his predecessor that modified the implementation of some aspects of the blockade in the areas of travelling and trade.  Likewise, he proclaimed that the United States would oppose all demands in favor of the lifting of the blockade at the United Nations and other international forums. This is an open challenge to the views expressed by the overwhelming majority of the international community as well as the public opinion of broad sectors of the US society.  He also derogated the Presidential Policy Directive “United States-Cuba Normalization” issued by President Barack Obama on October 14, 2016, which recognized that the blockade was an obsolete policy and that it should be lifted.

The blockade against Cuba is still in force and is being fully implemented.

Despite the announcements made by the US Treasury Department on March 15, 2016, stating that Cuba would be allowed to use US dollars in its international transactions and that US Banks would be allowed to grant credits to Cuban importers for the purchase of authorized US products, so far Cuba has not been able to carry out any significant international operation in this currency.

The increase of the aggressive rhetoric against our country and the measures announced on June 16, 2017, generate greater distrust and uncertainty among financial institutions and even among US suppliers due to fears and a real risk of being penalized for having relations with Cuba.

The damages caused by the implementation of the blockade throughout almost six decades have been estimated at 822, 280, 000, 000 dollars, taking into account the devaluation of the US dollar vis-à-vis the price of gold in the world market. At the current prices, the quantifiable damages caused by the blockade have been estimated at more than 130, 178, 600,000 dollars.

On June 16, 2016, as part of his new policy toward Cuba, the US President Donald Trump announced new measures to tighten the blockade against our country.

Those measures, described in the Directive signed by Trump under the title “National Security Presidential Memorandum on Strengthening the Policy of the United States toward Cuba”, are the following:

These new executive orders reverse the measures adopted by the administration of President Obama who, for the first time since the enactment of the blockade against Cuba, recognized that this was a failed and obsolete policy that should be ended; and urged the US Congress to lift it.

The blockade causes damage to Cuba in several sectors.

Health Program. Since the triumph of the Revolution in 1959, the provision of free medical care to the people has been an inviolate principle of the Cuban Government, despite the negative impact of the blockade and other aggressions suffered by Cuba throughout all these years. The purpose of forcing the Cuban people into surrender through hunger and disease has turned sectors such as public health and food into targets of the US blockade. The most harmful effects caused by the application of this policy against the Cuban people are the difficulties to acquire in the US market the medicines, reagents, spare parts for diagnosis equipment and other inputs needed in the health sector.

Education.  The blockade imposed by the United States affects the Cuban programs aimed at ensuring a quality, universal and free education at all levels.

Culture. The implementation of the US blockade has affected bilateral exchanges in the field of culture. The blockade prevents the adequate promotion, advertisement and marketing of the Cuban artistic talent; it reduces to a minimum the sale prices of cultural products and services and restricts the enjoyment of Cuban music by the international audience, due to the control exerted by the big transnational of art and music, most of them from the United States.

Right to Development.  Despite the exchange with US business people and scientists delegations as well as the materialization of some cooperation projects, the biotech sector in Cuba continues to be affected by the US blockade.

Many other sectors, such as tourism, foreign trade and investments have been negatively impacted in the Cuban economy by the blockade. The strengthening of the US sanctions regime against Cuba is a setback in bilateral relations, which places additional obstacles to the very limited and scarce economic and commercial relations between both countries.   The measures approved by President Trump would not only lead to a reduction in US citizens travels to Cuba, but also to the imposition of new prohibitions that will affect the interests of the US business sector.

In conclusion, it’s necessary to keep in mind that the economic, commercial and financial blockade imposed by the Government of the United States against Cuba is being tightened and is fully implemented. This policy continues to be the only obstacle to the development of the Cuban economy and the full enjoyment of all human rights by the Cuban people.

How do you see the role of the United Nations, especially the General Assembly vis-a-vis the sanctions against Cuba?

At the United Nations General Assembly, 191 of the 193 of the nations voted to condemn the blockade in 2016, as the majority have done during the past several decades. The difference in 2016 being that the U.S and Israel abstained from voting for the first time since both nations have continuously voted against it. Now with the Trump administration overturning many Obama-era acts, the likelihood of any more concessions from the U.S are unlikely.

Each year, the Secretary General of the United Nations circulates to all UN Member States the note requesting the contributions in order to prepare the annual report on the implementation of the resolution presented by Cuba in the General Assembly of the United Nations “Necessity of ending the economic, commercial and financial blockade imposed by the United States government against Cuba.” This request responds to the mandate contained in Resolution A / RES / 71/5, adopted by the UNGA on October 26, 2016, which was almost unanimously endorsed by the member states of the Organization.

On November 1st , the United Nations General Assembly will vote on the Resolution 71/5 calling for an end to the economic, commercial and financial blockade of Cuba. We are certain that the international community will again be on the side of Cuba.

How would you describe Pakistan Cuba relations particularly in the fields of social and humanitarian work?

The bilateral relations between Cuba and Pakistan are very good from all aspects,   although in the economic area they could definitely be extended.

In 2015, 60 years of the establishment of diplomatic relations were commemorated in Islamabad and in Havana. Throughout that time, the actions of both countries in all fields have been manifold. The last round of talks between foreign ministries was held in Havana in late 2016 with very positive results for both sides. There have been exchanges of government and parliamentary delegations. The Speaker of the National Assembly of Pakistan visited Cuba in 2014 and this year Chairman Senate visited Cuba, with the signing of a Memorandum of Understanding (MoU) that will further strengthen inter-parliamentary ties.

Is it possible for Pakistan to have direct trade links with Cuba?  If no, why?

Of course it is possible to have direct trade links and both parties do their best to do so, for our mutual interest.  In August this year a delegation of businessmen from various sectors of the Pakistani economy were in Havana interested in exchanging with Cuban entrepreneurs. This visit had a positive result and offers greater prospects for trade to take place directly, since there are mutual interests.

In what areas do you think both countries can cooperate?

Huge interest has attracted the creation of the Special Development Area of Mariel, destined to become an important pole of attraction for foreign investment and at the same time a testing ground in modern technologies and new forms and methods of business management, in harmony with the preservation of the environment.

This port is on the northwestern tip of Cuba and can serve as a center of maritime commerce, an entry to the region for exporters around the world, and the land near the terminal offers a low-tax corridor for multinational companies. The port and the adjacent economic development zone represent one of Cuba’s most publicized bets to attract foreign investment and to create jobs. Mariel Port, opened in 2014, is capable of managing 824,000 containers a year, a capacity that could increase up to 1 million containers. The economic development zone created around the port should attract foreign companies in sectors such as electronics, chemicals, computers, biotechnology and pharmacy.

On the other hand, Pakistan could also benefit from the Cuban experiences in the areas of medical science and healthcare. The Cuban biotechnology industry is a remarkable success and has produced a remarkable array of products, advanced vaccines, pharmaceuticals and diagnostic products. The current set of drugs in development is robust and the Cuban biotechnology industry has played a central role in improving the health of the population. Despite being a very poor country, Cuba has one of the lowest maternal/child death rates in the world and one of the longest average lifespan. More than 40 products and technologies created by the industry are currently in use.

In this scenario we are sure that the relationship of trade between Cuba and Pakistan has enormous potential. We can increase exchanges to promote relations particularly in the areas of trade, education, health and biotechnology, culture and sports.

Cuba remains committed to continue promoting and strengthening mutual ties. Is our desire to expand our cooperation in different fields that are in mutual benefit and contribute to the economic and social development of both countries, as well as promote the actions in the international arena will contribute positively to the achievement of peace and greater prosperity and happiness for both countries.

Is there anything else that you may like to add?

I would like to send a friendly and warm message to the people of Pakistan who are making great efforts for the development of their country. I wish them all the best and a bright future.