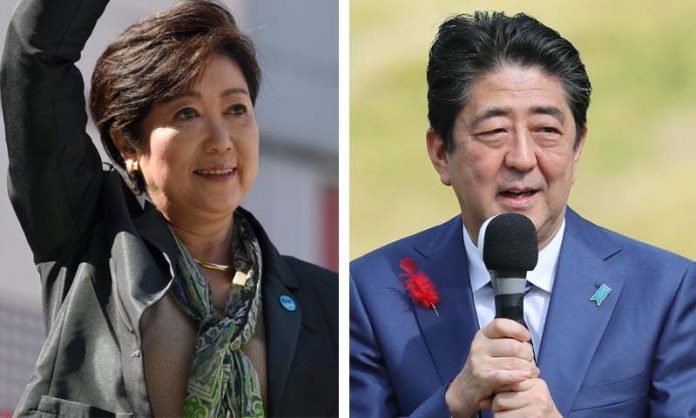 Tokyo’s popular governor Yuriko Koike launched a bitter attack on Prime Minister Shinzo Abe Tuesday as the gloves came off for the official start of a snap election campaign in the world’s third-largest economy. Conservative premier Abe, 63, is facing an unexpected and fierce challenge from the media-savvy Koike, who has upended the sleepy world of Japanese politics with her upstart “Party of Hope.” Addressing hundreds of commuters at a busy Tokyo station via loudspeaker, Koike called on supporters to “end the politics of Abe,” lashing out at the long-serving premier over recent scandals that have weighed on his popularity.

“The political status quo has continued while politics itself has lost the public’s confidence,” charged the former TV anchorwoman, 65.

Abe cut a contrasting figure by kicking off his offensive in the bucolic farming country of Fukushima, signalling his commitment to rebuilding the region hard hit by the 2011 nuclear power plant meltdown.

He pledged a major expansion of social programmes, including offering free early-childhood education in a bid to get more women into work, while also talking tough on North Korea.

In an obvious dig at Koike, he urged voters to consider his policies, rather than catchy soundbites.

“Boom and slogans do not open the way to the future. Policies unlock the future. We must not lose,” he said.

The 12-day campaign will be fought around reviving Japan’s once world-beating economy and the ever-present threat of North Korea which has threatened to “sink” the country into the sea.

Koike’s “Party of Hope” has swallowed up and replaced most of the main opposition party in the space of a week, transforming Japan’s staid political landscape.

But surveys suggest her bandwagon is grinding to a halt as she refuses to run herself for PM in the election, focusing on running the world’s most populous city with three years until Tokyo hosts the Olympic Games.

A poll in the top-selling Yomiuri daily suggested that 32 per cent of voters plan to vote for Abe’s conservative LDP with 13pc for the Party of Hope ─ down six percentage points from the previous poll in late September.

Abe is seeking a fresh term at the helm of the Asian economic powerhouse and key United States regional ally, and unexpectedly called a snap election to capitalise on a weak and fractured opposition.

But Koike stole his limelight by launching her party, attacking Abe’s government for being too slow to reform the country, weighed down by an ageing population, deflation and a huge debt mountain.

Critics argue that Abe called the early election to divert attention from a string of scandals, including allegations of favouritism to a friend in a business deal ─ which the premier strongly denies.

And analysts say the October 22 vote is effectively a referendum on Abe, who has enjoyed unrivalled political strength for the past five years in part because of a lack of credible opposition, while his key policies remained controversial or unpopular.