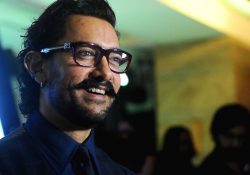 Bollywood superstar Aamir Khan is currently on a promotional tour for his upcoming movie ‘Secret Superstar’. Recently, he visited Turkey and was quite surprised to find out that he has a huge fan following in the country. A video has gone viral where a Turkish vendor played some neat and super cool tricks on Khan as he prepared the ice-cream. Where Aamir got indulged in Turkish delights and looked mesmerized by the beauty of Turkey, the actor didn’t miss a chance of meeting Turkish President Recep Tayyip Erdogan. At the occasion, Turkish government presented Aamir with the gift of the sacred Holy Quran.

He got a huge welcome at the airport, needless to say, Aamir was quite taken aback at the love he had received in Turkey and was pleasantly surprised at all the love that he had received. “I didn’t know that in Turkey young people were watching my films. They kept inviting me and since then I [have said I] would like to come here,” he stated.

Produced by Aamir Khan and wife Kiran Rao under the banner Aamir Khan Productions, the movie will hit theatres on October 19.