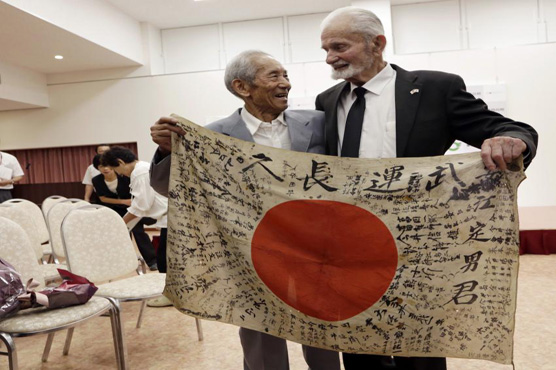 The war veteran traveled after 72 years, since Japan surrendered, to a remote village in Japan and returned the calligraphy-covered Japanese flag to the family of Sadao Yasue.

According to Reuters, Sadao Yasue belonged to a farming town in central Japan. He was the eldest of his siblings. Yasue carried a Japanese flag covered with signature messages of his family and friends.

Strombo, the 93-year-old U.S. Marine veteran, said that he found the flag on Yasue’s body on the island of Saipan after the battle in 1944.
“I finally realised that if I didn t take it, somebody else would have and it would be lost forever,” Strombo said in an interview provided by U.S. forces.

According to the Telegraph, Strombo traveled from the state of Montana U.S. to Japan after the family of Yasue was tracked down.

He stated that he was trying to return the flag soon after the war but didn’t know how. A non-profit Oregon based organisation Obon Society, helped the war veteran to track down the fallen soldier’s family.

The family welcomed the flag with tears.

Yasue carried the flag which had 180 signatures signed by his friends and neighbours wishing him good luck and safe return.

“It means so much to me and the family to get the flag back and move on,” Strombo said.

“It was a very emotional moment,” Strombo said, noting that he was especially moved by the response of one of Yasue s sisters.=DNA