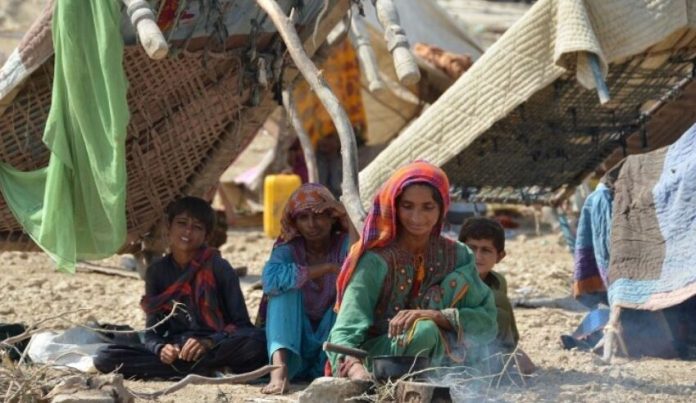 At least nine more people have died from water-borne diseases in flood-hit areas of Pakistan, officials said on Tuesday, warning they risked losing control of the spread of infections in a crisis that the United Nations Children’s Fund (Unicef) described as “beyond bleak”.

An intense and long monsoon dumped around three times as much rain on Pakistan than on average in recent weeks, causing major flooding which killed 1,559 people, including 551 children and 318 women, according to the disaster management agency.

This figure does not include those killed by disease in the aftermath.

Hundreds of thousands of people displaced by the floods are living in the open and as flood waters spread over hundreds of kilometres start to recede, which officials say may take two to six months, stagnant waters have led to diseases like malaria, dengue fever, skin and eye infections and acute diarrhoea.

The World Health Organization (WHO) has said the surge in diseases has the potential for a “second disaster”.

In Sindh, the region worst hit by the floods, the provincial government said nine people died of gastroenteritis, acute diarrhoea and suspected malaria on Monday, bringing the total number of deaths from diseases to 318 since July 1.

Over 2.7 million people have been treated for water-borne diseases at makeshift or mobile hospitals set up in flood-hit regions since July 1, it said, with 72,000 people treated at these facilities on Monday alone.

In a video message earlier today, Sindh Health Minister Azra Pechuho urged people to adopt safety measures against vector-borne diseases such as malaria and dengue as the death toll from catastrophic floods across the country neared 1,600.

“The government is doing anti-dengue sprays across the province but there are some precautions that people need to take at home as well,” she said in a video message.

“Apply mosquito repellant lotions on your body. Put mosquito coils on the entrance of the house at dawn and dusk. Don’t keep water open, make sure you cover it where it is in utensils or in buckets. Spray your houses,” Pechuho recommended.

She said that in case of fever, paracetamol and panadol should be consumed. In case of a low platelet count, go to a hospital immediately, the minister pointed out.

Pechuho added that a 24/7 emergency helpline (021- 99223374) has been launched by the Sindh government to cater to internally displaced persons and those affected by the floods.

Meanwhile, at a press conference later in the day, Sindh government spokesperson Murtaza Wahab said that Sindh saw a peak of 426 dengue cases on September 15.

“The health department and administration together worked and as a result, 221 cases were reported in the last 24 hours,” he revealed, adding that the caseload has effectively halved.

Regarding malaria, Wahab said that Sindh has reported 148,589 cases of the disease since the floods.

Earlier today, the Asian Development Bank (ADB) said that it was working “quickly” to provide a “significant” relief and rehabilitation package following catastrophic floods in the country.

In a statement, the ADB said that the package is designed to “support people, livelihoods, and infrastructure immediately and in the long-term”.

For the short and medium-term, the bank said it would use ongoing projects to repair damaged infrastructure, including roads and irrigation infrastructure, and to support the development and financial stability of the agriculture sector to boost food security.

“We’re also processing countercyclical support to help the poor and vulnerable, especially women and children, weather the impacts of food prices and other external shocks,” the ADB said.

“We will provide more details of our new assistance package when it is finalised. We will work closely with the government and other international agencies to help rebuild the lives and livelihoods of the more than 33 million people affected by the disaster,” the ADB concluded, adding that it stood with the people of the country.

The announcement came as Prime Minister Shehbaz Sharif arrived in New York to participate in the United Nations General Assembly where he is expected to highlight Pakistan’s climate catastrophe.

“Reached NY a few hours ago to tell Pakistan’s story to the world, a story of deep anguish and pain arising out of a massive human tragedy caused by floods. In my address at UNGA and bilateral meetings, I will present Pakistan’s case on issues that call for world’s immediate attention,” he said.