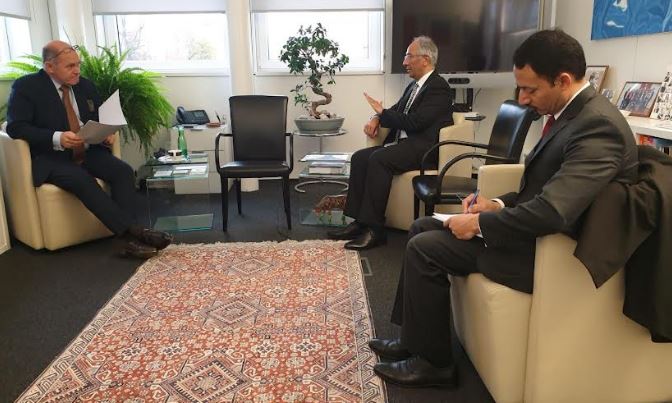 ISLAMABAD, NOV 17 /DNA/ – Ambassador of Pakistan to Austria, Aftab Ahmad Khokher, met Mr. Wolfgang Sobotka, President of the Austrian National Council today. They discussed all issues of mutual importance including situation in Afghanistan, Jammu and Kashmir and bilateral cooperation in the fields of education, trade and parliamentary exchanges.
Wolfgang Sobotka recognised importance of bilateral relations with Pakistan. Ambassador Khokher urged him to play his role for further strengthening the relationship. President Sobotka also recognized the importance of interactions between parliamentarians of the two countries. In this regard, he expressed his readiness to receive parliamentary delegation from Pakistan.
Talking about recent developments in Afghanistan, Ambassador Khokher said that peace and stability in Afghanistan were vital for Pakistan and the region. Pakistan had extended its full cooperation and worked with international community for evacuation efforts from Afghanistan. Mr. Sobotka appreciated Pakistan for facilitation in evacuation of Austrian nationals from Afghanistan. Ambassador Khokher stated that Pakistan could not afford any further instability in Afghanistan leading to more refugees’ influx and other serious security challenges.
Ambassador Khokher briefed Mr. Sobotka about the humanitarian crisis and human rights violations in Illegally Indian Occupied Jammu and Kashmir and urged that Austria and European Union should play their role for the right to self-determination to the Kashmiris.
Ambassador Khokher also invited Wolfgang Sobotka to visit Pakistan at his convenience. The President of the National Council of Austria welcomed the invitation and expressed his interest to avail any opportunity to visit Pakistan.