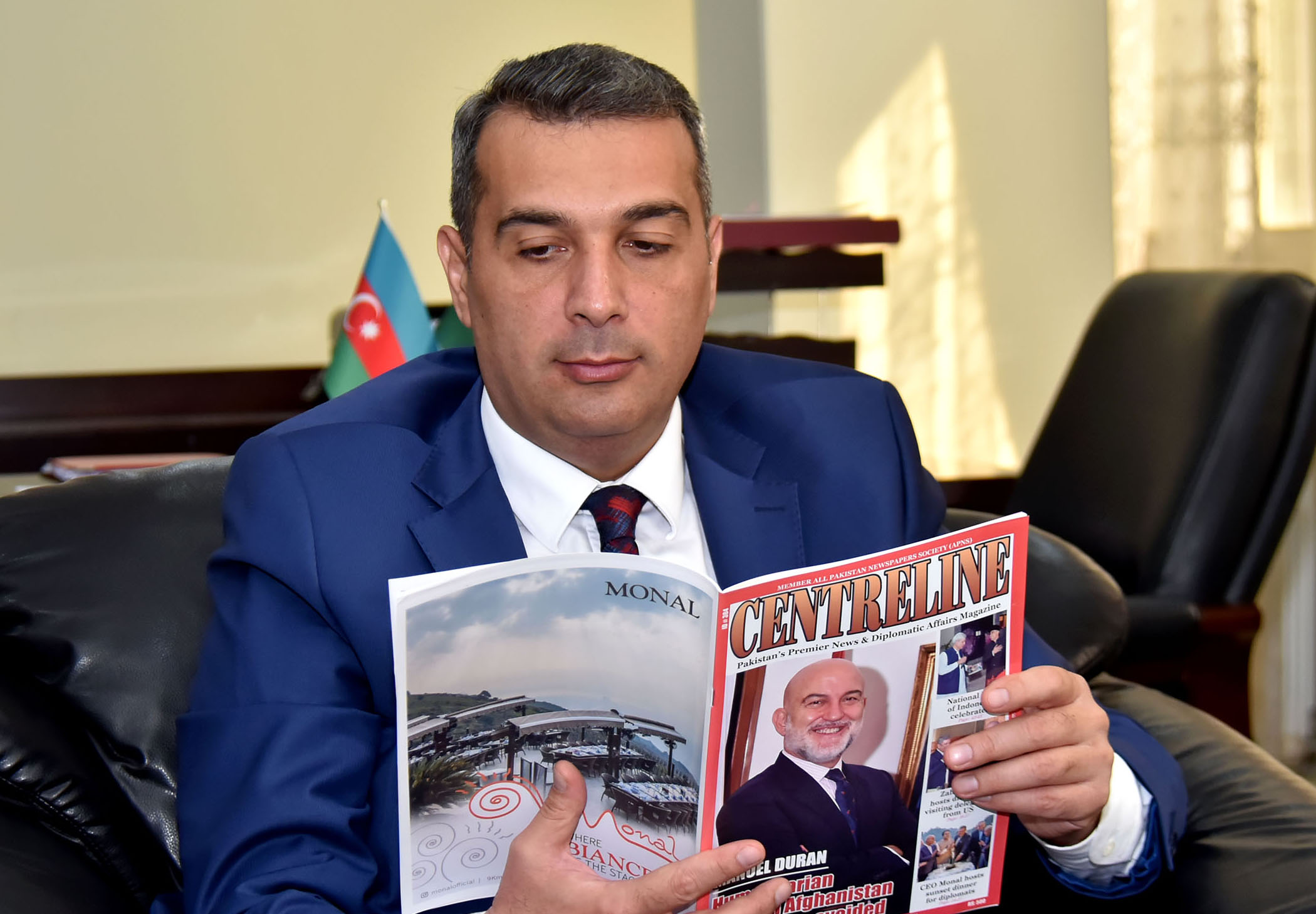 Khazar Farhadov says next year we will celebrate 30th anniversary of establishment of diplomatic relatons between our countries; calls upon the international community to hold Armenia accountable for grave war cimres

ISLAMABAD: Ambassador of Azerbaijan Khazar Farhadov gave an excluisve interivew to daily Islamabad POST and its sister publications, Centreline and DNA News Agency. Ambassador Khazar has just arrived in Pakistan. Having a rich expereince in diplomacy, Ambassador Khazar Farhadov is keen to furhter expand and diversfiy bilateral relations. His particular focus is on how to ensure connectivity between the two brotherly countries. His interview shall be published in two parts. Full text appears in the November 2021 issue of Centreline magazine.

1- First of all, we welcome you in Pakistan. Share with our readers the importance of restoring the independence of the Republic of Azerbaijan on October 18, 1991?

Thank you very much. On October 18, 1991, Azerbaijan obtained the opportunity to gain independence for the second time in the 20th  century and with the Constitutional Act “On State Independence of the Republic of Azerbaijan” declared to the world that it was the successor of the Azerbaijan Democratic Republic, which was the first republic in the history of all Muslim East. It should be noted that the Islamic Republic of Pakistan was one of the first countries that recognized our independence, and did not recognize Armenia due to its aggression against Azerbaijan.

The first years of independence were not easy for the young newly independent country and we faced great difficulties. On the one hand Armenia’s military aggression continued, and on the other hand, as a result of the collapse of the existing system, the economy was paralyzed. There were serious threats and risks to the Azerbaijani statehood. It was during this difficult period that the great leader Heydar Aliyev came to power in 1993 at the insistent demand of the Azerbaijani people. The great leader eliminated chaos and anarchy in the economic and political life of the country. Independent Azerbaijan has outlined a new course of developmentthat made independence eternal and irreversible.

Today, under the leadership of President Ilham Aliyev, Azerbaijan is one of the fastest growing countries in the world. Azerbaijan has become a leader in the region and has achieved sustainable economic development.

Azerbaijan has become a key player in actively promoting and implementing major projects aimed at ensuring stability, security and prosperity in the region and beyond. The Baku-Tbilisi-Ceyhan oil pipeline, the Baku-Tbilisi-Kars railway and the Southern Gas Corridor have made and will make a significant contribution in this regard.

Azerbaijan plays an active role in the creation and development of international transport corridors through its territory, such as East-West, North-South and South-West. Azerbaijan’s prestige and great potential have a positive impact on the expansion of our international relations.

2- How do you view the bilateral relations between Pakistan and Azerbaijan and what are your plans to further strengthen and deepen these relations?

Next year we will celebrate 30th anniversary of establishment of diplomatic relatons between our countries. We are very delighted that the relations between our countries are developing and strengthening very successfully. Azerbaijan and Pakistan have always supported each other on bilateral and international levels. Economic relations do not correspond to the level of our political relations. We are working to increase trade turnover between Azerbaijan and Pakistan. We have had some online meetings between our business communities. I would also like to note that the National Logistics Cell sent two trucks carrying Pakistani products to Azerbaijan via Iran for the first time within the framework of the TIR ​​Conventions. This project will also contribute to the growth of our trade relations. Azerbaijan and Pakistan have signed bilateral agreements in the fields of trade and economic cooperation, investment, tourism, transport, aviation, energy, as well as the Joint Intergovernmental Commission, Joint Working Groups on Trade and Agriculture are functioning. We are also working to establish new Joint Working Groups on energy, health, information technology, transport and education. The Pakistan-Azerbaijan Chamber of Economic Cooperation was established in Baku this year. The draft Preferential Trade Agreement (PTA) has been sent by Azerbaijan to Pakistan. We believe that these works and future joint projects will make an effective contribution to our economic relations.

3. What would you tell us about the 44-day Patriotic War of Azerbaijan?

Armenia for almost 30 years kept under occupation almost 20 percent of my country’s territory. The occupation was accompanied with notorious war crimes and crimes against humanity. Armenia committed the Khojaly genocide in February 1992, killing hundreds of civilians, including 106 women and 63 children. 1275 Azerbaijanis were taken hostage, 150 of them are still missing. Armenia’s ethnic cleansing has resulted in more than a million Azerbaijanis becoming refugees and internally displaced persons. In 1993, the UN Security Council adopted four resolutions demanding the immediate, complete and unconditional withdrawal of armed forces of Armenia from the occupied territories of Azerbaijan. However, these and all other similar resolutions adopted by relevant international organizations, including the UN General Assemblyhave been ignored by Armenia.

The OSCE Minsk Group was established in 1992 to resolve the conflict between Armenia and Azerbaijan. If the OSCE Minsk Group co-chairs had taken decisive steps to force Armenia to end its military aggression against Azerbaijan, their task could have been fulfilled. During the occupation Armenia tried to maintain the status quo. Unfortunately, no international sanctions have been imposed on Armenia to ensure the implementation of UN Security Council resolutions. And the overthrow of the war criminal regime in Armenia in 2018 was not accompanied by real changes, as well.

The Armenian government has made a number of provocative statements and actions, such as “Karabakh is Armenia and period”. The then Defense Minister of Armenia openly threatened Azerbaijan with a new war for the new territories. In addition, Armenia pursued a policy of illegal settlement of Armenians mainly from the Middle East, in the occupied territories of Azerbaijan, in gross violation of international law. In July 2020, Armenia committed a military provocation on the state border with Azerbaijan. As a result of an artillery strike in the Tovuz region of Azerbaijan, 13 servicemen and civilians were killed. In August last year, an Armenian sabotage group tried to penetrate through the former line of contact in order to commit terrorist acts against Azerbaijani military servicemen and civilians, but was successfully neutralized.

At the General Debates of the 75th Session of the UN General Assembly on September 24 last year, President Ilham Aliyev warned that hostile, Azerbaijanohobic statements and provocations of Armenian leadership demonstrate that Armenia was preparing for a new aggression against Azerbaijan. Three days later, on September 27 last year, Armenia launched a large-scale attack on Azerbaijani military positions and civilians.

In response, Azerbaijan launched a counterattack on its own territories against Armenia, using the right to self-defense enshrined in Article 51 of the UN Charter. For 44 days, the Armenian armed forces intensively fired on the regions and cities along and also far from the frontline. Armenia used ballistic missiles such as the Scud and Iskander-M, as well as banned white phosphorus and cluster munitions. As a result of these Armenian war crimes, more than 100 civilians, including 11 children, were killed and more than 450 were injured. More than 12,000 civilian infrastructure, including individual houses, has been destroyed or severely damaged in Azerbaijan. Armenia has attracted mercenaries and foreign fighters from abroad and placed them against Azerbaijan. In total more than 300 cities and villages were liberated on the battlefield. Armenia had to sign an act of capitulation on 10 November 2020. Accordingly, Armenia was obliged to withdraw its troops from the remaining part of Azerbaijan’s territories, namely Aghdam, Lachin and Kalbajar regions.  Azerbaijan has implemented itself the above-mentioned UN Security Council resolutions. The Nagorno-Karabakh conflict was left in the past. There is no administrative territorial unit called Nagorno-Karabakh in Azerbaijan. Karabakh and East Zangazur economic zones were established by a presidential decree signed on July 7 this year.

During the occupation, which lasted for almost 30 years, Armenia deliberately destroyed cities and villages, looted and plundered all cultural and religious monuments of Azerbaijan. Armenia has tried to erase the traces of Azerbaijanis living in these areas. The city of Aghdam was destroyed to such an extent that it was called “Hiroshima of the Caucasus”. 65 of the 67 mosques in the Armenian-occupied territories were demolished, and the remaining mosques were desecrated while being used as pig and cow barns. Even cemeteries have been destroyed and desecrated. The facts of complete destruction of cities and villages, as well as cultural and religious heritage of the Azerbaijani people have been widely covered by the Pakistani and international media.

Armenia has committed a serious ecocide in the occupied territories of Azerbaijan. 60,000 hectares of our forests have been destroyed, lands and rivers have been polluted.

Armenia has seriously polluted the transboundary river Oxchuchay, causing the degradation of the ecosystem of the riverine territory of Azerbaijan. Unfortunately, some foreign companies are also involved in this environmental crime. They must be held accountable for the illegal exploitation of our natural resources in our previously occupied lands.

We have about 4,000 citizens registered as missing during the First Karabakh War. Armenia must inform us about their fate. We have solid evidence that almost all of them were tortured to death by Armenian servicemen in violation of international humanitarian law and buried in mass graves.

The “Azerbaijaniophobia” promoted by the government is growing in Armenia. The racist ideology nurtured in Armenian society on the basis of ethnic hatred and demonization is the main cause of ethnic cleansing and unprecedented vandalism in the territories previously occupied by Armenia in Azerbaijan.