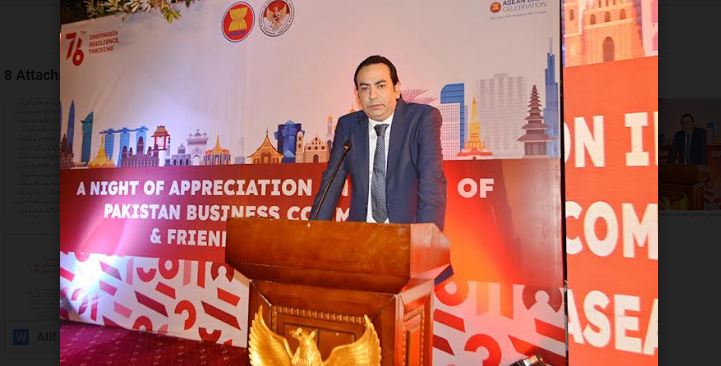 ISLAMABAD, OCT 28: Ambassador of Indonesia to Pakistan Adam M. Tugio commemorated the 76th anniversary of Independence Day of the Republic of Indonesia and the 54th ASEAN Day at his home.

The ceremony was held with limited participants, which adhere to strict health protocols regarding the Covid-19.

With all the challenges and limitations posed by the pandemic, the spirit of independence stays on with the people of Indonesia around the world in these tough times.

The ceremony was led by Ambassador of Indonesia to Pakistan Mr. Adam M. Tugio, and supported by the business community of the twin cities.

In addition to the Independence Day celebration of the Republic of Indonesia, the embassy also hosted several other programmes.

Speaking at the occasion, Ambassador Adam M. Tugio said that Indonesia and Pakistan have historical relations deeply rooted in mutual respect and support at the regional and global levels.

Indonesia attaches great importance to its relations with Pakistan and there is complete harmony and close cooperation between the two countries in matters of global and regional matters.

Leading Palm oil importer and former Chairman Pakistan Vanaspati Manufacturers Association (PVMA) Atif Ikran Sheikh said that on behalf of the business community of Pakistan, I wish all the happiness, warmest wishes to you and the people of Indonesia.

He said that Pakistan greatly values Indonesia’s democratic leadership in the Indo‑Pacific. The close partnership between Pakistan and Indonesia is more important now than ever.

We look forward to working together to deepen our economic and people-to-people ties, fight the pandemic and drive early recovery and move towards a shared goal of peace and prosperity.

We will promote trade, peace and stability through our sincere efforts as Indonesia is among the top ten trading partners of Pakistan. The trade relations between the two countries have come a long way with Indonesia becoming the 8th largest trading partner of Pakistan in 2018. In 2020, the bilateral trade volume was the US $ 2.6 billion and now it’s almost three billion dollars.

Atif Ikram Sheikh said that we have asked the government to slash import duty on palm oil so that masses can get ghee and cooking oil at reduced prices.

He also asked the palm oil-exporting countries to boost output and slash export taxes to control prices as billions of people consume this oil.