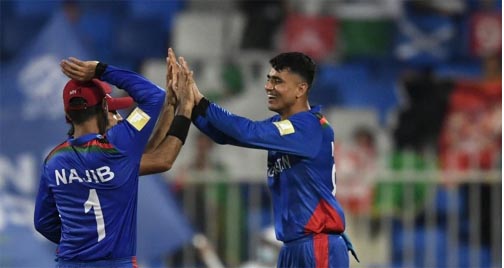 DUBAI, OCT 25: Afghanistan delivered a remarkable performance against Scotland, beating them by 130 runs thanks to a magical bowling display from Mujeeb Ur Rahman.

After winning the toss, Mohammad Nabi opted to bat first which proved to be a great decision as Afghanistan’s openers got them off to a blazing start with a quick-fire 50-run partnership.

Mohammad Shahzad (22) was the first one to be dismissed as Safyaan Sharif got the breakthrough. His opening partner, Hazratullah Zazai kept the pressure on from the other end and ended up with 44 runs from 30 balls which included three boundaries and three sixes.

Hazratullah was eventually dismissed by Watt after being deceived as his quicker one ripped through Zazai’s defense.

Safyaan Sharif made the breakthrough twice for Scotland as Josh Wavey and Mark Watt both picked up a wicket each as Afghanistan finished with 190/4 after 20 overs.

In response, Scotland had no answers for Afghanistan’s spin-attack as Mujeeb Ur Rehman ripped through their defenses and picked up a five-for by leaking only 20 runs.

After being 28/0, Scotland were tumbled over by Mujeeb Ur Rehman as they ended up 37/5 after the Powerplay. The spinner took the wickets of Coetzer, MacLeod, and Berrington in the space of five balls.

Scotland failed to get a grip on the match as wickets started falling from both ends; Rashid Khan joined in on the action and ended up taking four wickets of his own as well.

Scotland had five players dismissed without scoring a single run, three of which were golden ducks.

Mujeeb Ur Rehman was named player of the match for his remarkable bowling performance. He finished with the figured of 4-0-25-5.