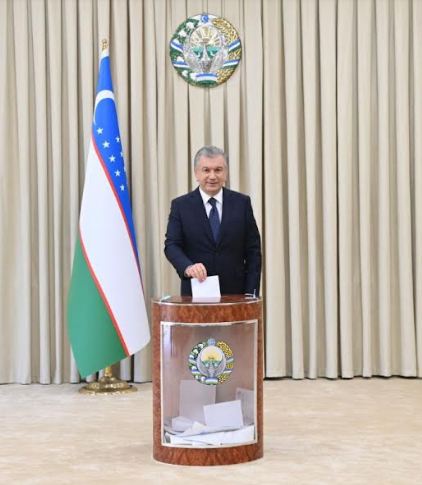 TASHKENT: The Presidential elections in Uzbekistan have been declared by the international observers and delegates as valid where all the candidates had equal opportunities of putting forth their agendas and future plans. The turnout remained extremely high as a majority of the Uzbek voters thronged to the polling stations in order to cast their vote. It was quite encouraging to see a large number of youths casting their votes, most of them, for the first time. Though the official election results shall be announced later, the incumbent President Shavkat Mirziyoyev, according the initial results, has won the election with  a thumping majority and thus set to rule the country for another five era term.

The Uzbek Election Commission had made elaborate arrangements for the facilitation of voters. This scribe had the chance of visiting a number of polling stations in the city center and the suburban areas and was greatly touched to witness smooth and disciplined polling drill. The Election Commission staff had made special arrangements to brief the international observers about the details of the entire drill.

The incumbent  President Shavkat Mirziyoyev faced no big opposition but plenty of challenges as he bids to reform the ex-Soviet country.   Mirziyoyev has been credited for launching what he calls a “New Uzbekistan”, ending a decades-old system. He came to power in 2016 after the death of Islam Karimov, who ruled Uzbekistan for 27 years.

A large number of foreign observers, journalist, and members of the civil society were invited to monitor the presidential election. A sizeable group comprising prominent personalities was also in Tashkent to monitor the elections.

There is no denying the fact that the new leader presided over an unprecedented boom in foreign tourism in the country that borders Taliban-controlled Afghanistan and counts China and Russia among its partners. Voting across the landlocked country of 34 million people began at 8:00 am local time and ended at 8:00 pm.

Under the rule of President Shavkat Mirziyoyev, Uzbekistan has strengthened traditional relations with Beijing and Moscow.  Similarly, Uzbekistan has ventured to have close and cordial relations with neighboring countries such as Pakistan. In July this year Prime Minister of Pakistan Imran Khan visited Uzbekistan to take part in an international conference.  The good thing with the new Uzbekistan is that it gives you an absolutely new look whenever you visit this fast emerging economy. The country can surely be proud of being a house of the vibrant peoples and thriving business and touristic hub. A few years ago perhaps nobody could predict that Uzbekistan would acquire strategic and regional importance within a short span of time.

This great Central Asian country started making strides towards progress and development when the incumbent President Shavkat Mirziyoyev took charge of the office. The way President Shavkat carried forward the futuristic policies of the founding President late Islam Karimov, is ostensibly unparalleled. It is because of the visionary leadership that Uzbekistan now stands out prominently among the comity of nations. Internally, the country has seen colossal developmental activities.

The infrastructure has been streamlined on modern lines while the living standard of people has also been improved albeit in the remote areas life still is more challenging. When I talked to people on streets, cafes; working places and even students, everybody seemed satisfied with the way the incumbent President had been running the country. I met a middle-age man, in a café, who had never exercised his voting right, but this time he was all agog to cast his vote for President Shavkat as according to him the President had changed the lot of the country and people as well.

Without exaggeration it is worth noting that the foundation of a new era of the Renaissance is being laid in the country, requiring qualitatively new approaches in the foreign policy. In a word, Uzbekistan’s foreign policy interests are based primarily on the priorities of internal development, which actually means an obvious shift towards the economization of the country’s international cooperation and the strengthening of economic pragmatism in external relations.

Summing up, President Shavkat during his next term would like to fulfill his agenda of social and political reforms. His focus ostensibly shall also be on how to put the Uzbek economy back on track, which is slightly disturbed by the pandemic. Like Pakistan, Uzbekistan too has successfully handled the pandemic. It is good to see life returning to Uzbekistan with international visitors once again flocking to the country in order to quench their touristic thirst by visiting the landmark sites and picturesque valleys.