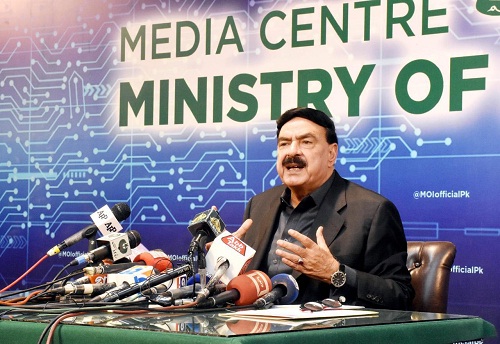 Islamabad : Interior Minister Sheikh Rashid has said steps are being taken to improve law and order in the country.

Talking to the media in Islamabad on Sunday, he expressed the hope that all issues will be resolved amicably during talks with a TLP delegation visiting the Interior Ministry on Monday.

The Interior Minister said he, along with other members of the government team, held lengthy discussions with the TLP leadership, including a one-on-one meeting with TLP Chief Saad Hussain Rizvi.

He said it has been decided that the TLP workers will stay back at Muridke till final outcome of the talks. He said the government does not want any confrontation with religious forces.

Sheikh Rashid Ahmed said the issue of French Ambassador will be taken to the assembly as per promise.

To a question, the Minister said he went to UAE to watch Pakistan’s cricket match with India, but in view of law and order situation back home, he has to return to Pakistan on the advice of Prime Minister Imran Khan.

He wished victory for the Pakistan team.