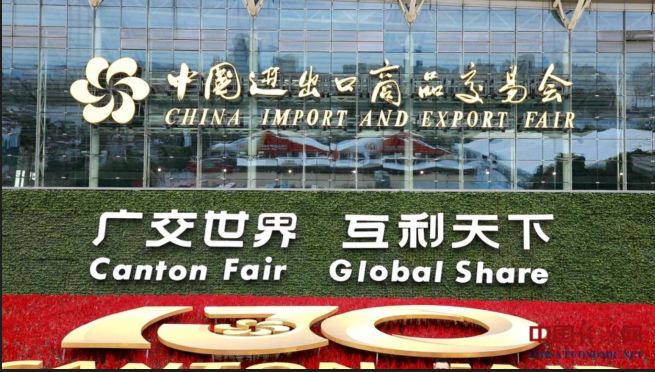 BEIJING, Oct. 22 (DNA): “We look forward to exploring more business opportunities in Pakistan!” said international traders attending the 130th China Import and Export Fair held in Guangzhou, Guangdong Province, China, according to China Economic Net. Scheduled this week, the 130th China Import and Export Fair, also known as Canton Fair, was held both online and offline for the first time as the COVID-19 pandemic adversely impacted the events industry. Some traditionally face-to-face communication has shifted to a screen-to-screen one.
The five-day-long event has attracted about 8,000 enterprises that have set up nearly 20,000 booths.  Diyar Khan, Consul General of Pakistan in Guangzhou, said China is a major trading partner of Pakistan and Guangdong is Pakistan’s largest trading partner in China, so “the Canton Fair is very important for us and we’ll continue to attend it.”
Some merchants admit that the pandemic did affect the trade between China and Pakistan. Jiangyin Well-Faith International Business Co., Ltd. told China Economic Net that there were many Pakistani buyers attending the Canton Fair before the pandemic, but “only a few can be seen this year.” “Back in 2018 we could ship 1.2 million solar powered fans to Pakistan. But the sales volume declined then due to the pandemic,” noted Ms. Liang from Foshan Carro Electrical Co., Ltd., one of the leading manufacturers and exporters in offering smart ceiling fan and lighting in China.
She added that right now they only shipped 1 or 2 containers of fans to Pakistan per month, with 4,500 fans in each container. However, they don’t want to be stuck here. Tomlinson Tu, sales manager of Chongqing Xinguizun Motorcycle Co., Ltd., used to ship to Pakistan motorcycle accessories, is now seeking to co-work with Pakistanis friends to build their own brand and sales model in the country. “With that we could get more locals into employment,” he said, adding that China and Pakistan are good brothers and true friends and it is his goal to make a fortune with his Pakistani counterparts. “We had branches in Pakistan,” mentioned Ms. Liang from Foshan Carro. She pinpointed that cooperating with Pakistan to set up assembly plants in the country has been proved to be efficient.On top of that, both traders from Raoping Jingxin Printed Ceramic Factory and Jiangyin Well-Faith International Business Co., Ltd. told CEN reporters that online platforms and social applications play a significant role in boosting trade and keeping their Pakistani customers in touch. “They’re really nice to us,” said a sales manager form Raoping Jingxin Printed Ceramic Factory, adding that they send emails of their Pakistan-localized printed porcelain to Pakistani customers during this special period. “Hopefully this fair is the beginning for the economy to be back again,” said Diana from Asia-Startrans.Diyar Khan noted that the online Canton Fair is quite innovative and it will become an efficient way to boost international trade during the pandemic era.
He said, “we actively promote the online Canton Fair through Pakistan’s Ministry of Commerce and Chamber of Commerce.” Launched in 1957, the Canton Fair is a comprehensive international trade event. Over years of development, it now serves as the first and foremost platform to promote China’s foreign trade, and a barometer of China’s foreign trade sector. It is a window, epitome and symbol of China’s opening up.