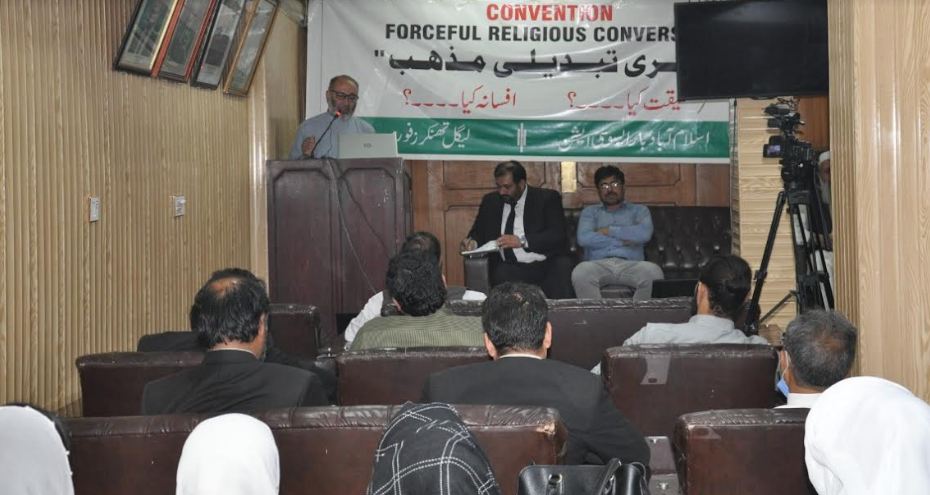 ISLAMABAD, OCT 06 (DNA) – The impending anti-forced conversions legislation in Pakistan, which has already been tabled before the parliamentary committee on minorities contravenes the basic tenets of the Constitution and flouts the legislative authority of the Parliament as the proposed bill is imposed rather indigenous and aims to serve foreign interests.

This was the crux of the discussion held at a seminar titled ‘rhetoric and reality of forced conversions in Pakistan’ which was organized by Islamabad Bar Association and Legal Thinkers Forum in collaboration with Institute of Policy Studies inside Islamabad Kachehri.

Outlining the vested interest groups behind the proposed bill, Senator Mushtaq alleged that the terms of reference (TORs) of the senate parliamentary committee on minorities were formed with the approval of the Church of England and the US State Department. He blamed the government authorities of enacting laws undermining or belittling statutes on blasphemy and death penalty, and creating hurdles in the way of religious conversions to appease international donors.

He further opined that under the proposed bill, newly converts will have to follow a very lengthy and cumbersome process to prove that their decision of conversion was devoid of any coercion or blackmailing. He expressed dismay over the condition set in the bill suggesting a convert will have to earn a certificate from a session judge after a 3-months rigorous process of confirmation before he would be officially considered a Muslim.

Senator rued that the proposed bill is in contravention with the injunctions of Islam and the spirit of the 1973 constitution which was made in the light of Allama Iqbal’s Allahabad address given in 1930 and Quaid-e-Azam’s speeches delivered before and after the creation of Pakistan.

Ghulam Hussain presented key findings of his research to the audience and briefed them about the present ongoing debate vis-à-vis the proposed anti-forced conversion bill.

Debunking the allegation of 1000 forced conversions of Hindu girls each year in Pakistan, Sufi apprised how so-called human rights organizations fabricate data and cite each other as an authentic source to give credence to their botched claims. No empirical evidence in justification of this claim is found in the reports presented by human rights organizations including the Human Rights Commission of Pakistan (HRCP), he said.

He was of the view that marriage is the prime reason behind such conversions as Islam does not allow Muslims to tie the knot outside their religion. Hence, faith conversion becomes a ritualistic need for a converter, he explained.

Following Hussain’s presentation, other speakers saw on legal measures being mulled by the federal government to regularize faith conversion in Pakistan – including the proposed anti-forced conversion bill – as part of a foreign imposed agenda, urging the state not to impede non-Muslims who want to embrace Islam under no duress. = DNA