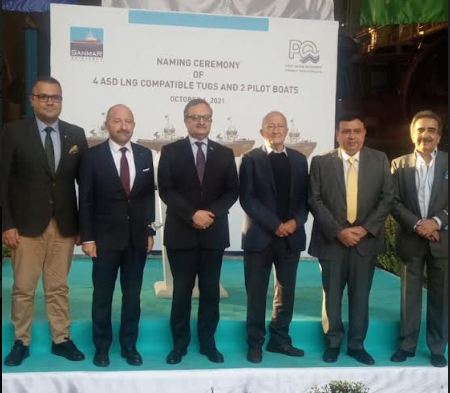 ISTANBUL, OCT 6 /DNA/ – A ‘Naming Ceremony’ was organized at SANMAR Shipyards, Istanbul to commemorate cooperation between SANMAR Shipyards, Turkey and Port Qasim Authority (PQA), Pakistan. Under an agreement, PQA has bought 4 ASD LNG Compatible Tugs and 2 Pilot Boats from SANMAR Shipyards. This project is yet another manifestation of the growing ties between Pakistan and Turkey in the maritime domain.

Speaking on the occasion, Chairman PQA, Rear Admiral (R) Syed Hasan Nasir Shah noted that the agreement between PQA and SANMAR would prove to be a landmark agreement and would further boost cooperation between the two countries in maritime affairs.

The Ambassador, in his remarks, said that Pakistan and Turkey are cooperating in both civilian and defense sides of maritime affairs. He highlighted the existing potential and prospects of joint collaboration between the shipbuilding industries of Pakistan and Turkey.

SANMAR Shipyards has decades of experience in building tugs, workboats and pilot boats for national and international customers, and provides technical consultancy services. Once completed, the 4 ASD LNG Compatible Tugs and 2 Pilot Boats will be handed over to the Port Qasim Authority, Pakistan.