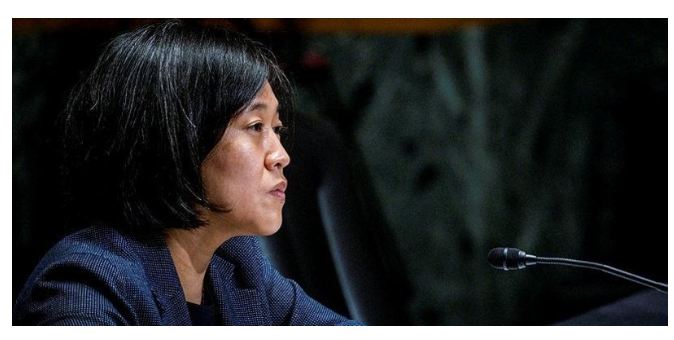 WASHINGTON: The United States will in the coming days have “frank conversations” with China on trade as the Biden administration believes the Asian giant has not honored its commitments under an agreement signed in January 2020.

“China made commitments intended to benefit certain American industries, including agriculture, that we must enforce,” US Trade Representative Katherine Tai will say in a speech Monday to US think tank the Center for Strategic and International Studies.

According to excerpts from her speech, which she is due to deliver at 10:00 am (1400 GMT), Tai will also announce the launch of “a targeted tariff exclusion process” for exemptions from customs tariffs imposed on $370 billion worth of Chinese goods a year by the previous Trump administration.

The punitive tariffs, imposed in retaliation for Chinese trade practices deemed “unfair”, are criticized by many companies.

In early August, some of the most influential US business groups urged the Biden administration to reduce these surcharges, pointing out that US industries faced “increased costs” as the tariffs are paid by importers.

A senior US official, speaking on condition of anonymity, said the tariffs “will remain in place” for the duration of the exemption procedure.

President Joe Biden had asked Tai to conduct a comprehensive review of US trade strategy towards China and the tariffs initiated by his Republican predecessor Donald Trump.

“We continue to have serious concerns with China’s state-centered and non-market trade practices” that were not addressed in the “Phase One” agreement reached in 2019 to calm a trade war between the two economic superpowers, Tai will say.

“As we work to enforce the terms of Phase One, we will raise these broader policy concerns with Beijing.”

The deal signed by Trump and Tai’s opposite number, Vice Premier Liu He, committed Beijing to adding an extra $200 billion in purchases of US exports, including energy, agricultural and manufactured products through 2021.

That is far from happening, trade analysts say.

The Biden administration official did not specify the extent of the shortfall, while indicating that Washington is unsatisfied.

“There are some commitments that have not been met and we think the results overall of the agreement have been mixed,” the official said, while stressing the US objective “is not to escalate trade tension.”

‘WORK WITH OUR ALLIES’

Tai’s speech will highlight the Biden administration’s strategy of teaming up with allied democracies in its competition with China.

Trump, who rejected traditional US alliances, sparked market anxiety around the world with his trade war.

However, he ended up producing limited concrete results, let alone progress on the deep-seated problems that the United States and its allies say plague their China trade relationship.

These include massive state subsidies for national companies, intellectual property theft and other factors creating a heavily uneven playing field.

Washington “will use the full range of tools we have and develop new tools as needed to defend American economic interests from harmful policies and practices,” Tai will say.

“The core of our strategy is a commitment to ensuring we work with our allies to create fair and open markets.”

Tai will also stress that the trade and economic relationship between the United States and China “is one of profound consequence.”

“As the two largest economies in the world, how we relate to each other does not just affect our two countries. It impacts the entire world and billions of workers.”

Overall, Washington sees a bleak outlook, with the administration official saying “we know that China is unlikely to make meaningful reforms right now” and that there is no push for starting long-awaited “Phase Two” negotiations.

“Beijing is increasingly explicit that it is doubling down on its authoritarian, state-centric approach, and is resistant to addressing our structural concerns,” the official said.

“We recognize that China simply may not change and that we have to have a strategy that deals with China as it is, rather than as we might wish it be,” the official said.

“Our primary focus will be on building resilience and competitiveness, including with our allies and partners.”