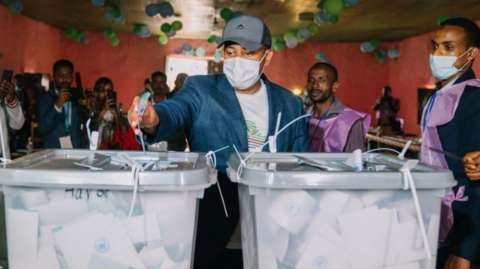 Ethiopia’s Prime Minister Abiy Ahmed is expected to be inaugurated and form a new government on Monday, following controversial elections last June that saw a landslide win for his Prosperity Party.

His party’s win, overshadowed by a deadly war in the northern Tigray region, means Mr Abiy will stay in power for the next five years.

He came to lead Africa’s second most populous country in 2018 following years of anti-government protests. At the time, he was a little-known figure who went on to immediately win the hearts of millions with his reform measures.

A rise in ethnic clashes soon posed significant problems for him. But his main challenge yet came about a year ago when war broke out in Tigray.

Thousands are believed to have been killed with all warring parties implicated in atrocities.

Once the darling of the international community with a Nobel peace prize under his belt, his administration is now accused of blocking aid to Tigray.

June’s elections were marred with controversy, with some of the major opposition groups boycotting them.

With his new government, Mr Abiy will face old problems – finding a solution to a deadly war being the most pressing one.