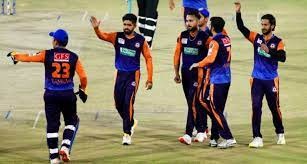 RAWALPINDI, Oct 04 : ATF Southern Punjab suffered their sixth successive defeat in the National T20 2021-22 as Home City Central Punjab romped home by seven wickets in the 18th and last match of the Rawalpindi-leg of the tournament played at the Pindi Cricket Stadium on Sunday night.

Central Punjab comfortably chased down the 120-run target with their captain and ace batter Babar Azam scoring his 59th T20 half-century. During the course of his unbeaten innings, Babar broke the record for the fastest 7000 runs in the T20 format. Babar reached the milestone in a mere 187 innings going past former West Indies captain Chris Gayle who reached the landmark in 192 innings.

Central Punjab completed the chase in 17.2 overs with Babar remaining undefeated on 59 off 49 balls. The right-hander hit five fours and two sixes in his innings. Kamran Akmal scored 28 off 26 balls (three fours), batting at number three, Kamran added 64 runs for the second-wicket with Babar.

The two had come together after the early loss of Ahmed Shehzad (9). Qasim Akram who was promoted to number four fell for 10 while Hussain Talat (10 not out) finished the game with Babar on the other end.

Southern Punjab who are languishing at the bottom of the table are on the cusp of elimination, they would need to win all of their remaining four matches in the Lahore-leg which commences on Wednesday, 6 October to have any chance of qualifying for the semi-finals.

Earlier, Southern Punjab lost their last eight wickets for a mere 34 runs as they were bowled out in 18.4 overs. The bottom-placed team in the points table had a shocking start as Faheem Ashraf (player of the match) accounted for Zeeshan Ashraf and Sohaib Maqsood for ducks in the first over of the match.

Salman Ali Agha and Azam Khan brought their team right back in the hunt with an attacking 84-run partnership for the third-wicket. Both Salman and Azam looked set for big scores, however both were dismissed in quick succession to trigger the Southern Punjab collapse.

Southern Punjab slipped from 85 for two to 119 all out with Hasan Ali doing the damage in the middle and death overs.

Salman who was the first to go (caught by Sameen off Hasan), scored 40 off 29 balls (five fours). Azam who hit a couple of towering sixes in his 45 was run out by a direct hit from Ahmed Shehzad. The right-hander faced 41 balls and hit three fours and as many sixes.

No other Southern Punjab batter could reach double figures as the Central Punjab bowlers maintained their stranglehold by making regular inroads.

Hasan finished with four wickets for 24 runs in 3.4 overs while Faheem took three for 14 in his four.

Player of the match:  Faheem Ashraf