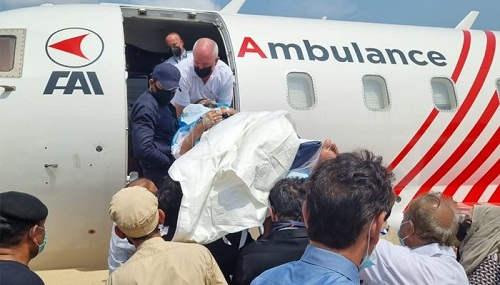 KARACHI: Legendary comedian Umer Sharif left for the US to seek medical treatment Tuesday in an air ambulance.

The actor was shifted to the air ambulance after his immigration process was completed at the airport.

A team of foreign doctors had conducted a medical check-up of the comedian at a private hospital and interacted with him as well.

His family sources disclosed that the doctors’ team had declared Sharif fit for air travel.

Umer Sharif also held a telephonic conversation with his physician Dr Tariq Shahab in the US.

Meanwhile, talking to journalists, his son Jawad Umar had said that his condition is a little better as compared to yesterday.

A day earlier, Umer Sharif had been shifted to the ICU of a private hospital after his health condition deteriorated, hours before he was to leave for the United States.

His son had said that Sharif’s health condition worsened when his blood pressure shot up and he was moved to critical care on Monday. Jawad Umar said doctors had decided to keep Sharif under observation for 24 hours. He maintained that the comedian’s condition was improving but he could not say anything about his travel to the US right now.

Yesterday, Umer Sharif was shifted to the ICU after his health condition deteriorated.

His departure had been delayed after doctors said the next 48 hours are critical for his health.

Dr Tariq Shahab, the husband of Pakistani actress Reema Khan who was overseeing arrangements for Sharif’s treatment in the US, told that the actor’s blood pressure dropped at dialysis.

He had said Sharif was shifted to the ICU after his condition worsened, adding that the actor was not able to undertake a long journey. Shahab had said that any decision regarding Umer Sharif’s departure to the US would be made after taking into view his condition.

He had said that the air ambulance company has been informed about the patient’s condition.