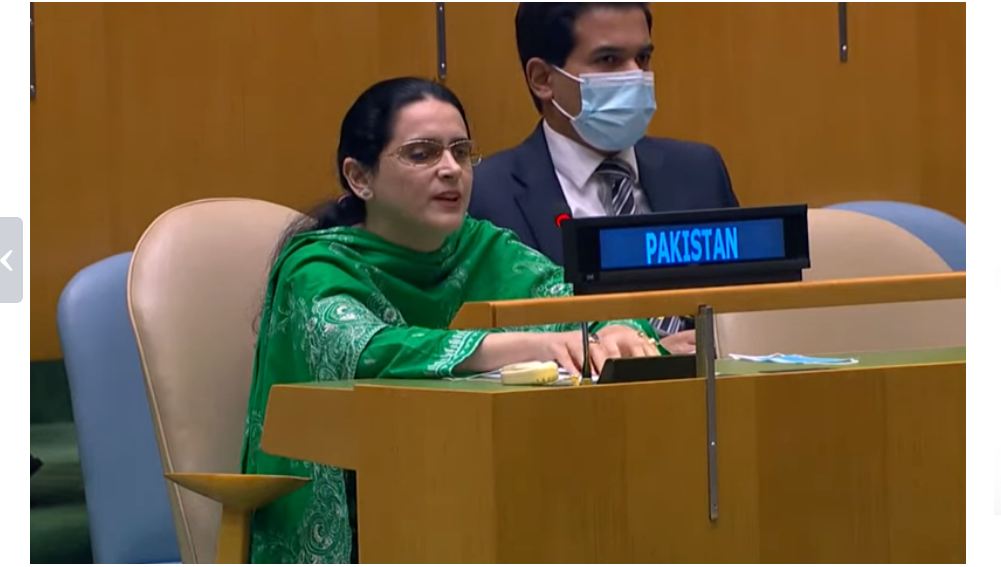 NEW YORK, SEPT 25: Pakistan hit back at India after the latter described occupied Kashmir as an “internal matter” and levelled allegations of sponsoring terrorism against the former.

In her speech, India’s First Secretary Sneha Dubey said Pakistan played the “victim of terrorism” but instead fostered terrorists in its backyard.

She also claimed that occupied Kashmir and Ladakh “were, are and will always be an integral and inalienable part of India”. She emphasised that this included areas that are “occupied” by Pakistan, according to the report.

In response, Pakistani representative Saima Saleem said that occupied Kashmir was not a “so-called integral part of India nor is it India’s internal matter”.

“India remains in occupation of an internationally recognised disputed territory whose final disposition needs to be decided in accordance with the democratic principle of a free and impartial plebiscite under UN auspices, as provided for under numerous resolutions of the Security Council,” she said.

She said that India was levelling baseless allegations and relying on “outright lies and obfuscation” to divert attention from human rights violations in occupied Kashmir.

“India’s compulsive obsession with Pakistan is neither new nor surprising. It has permeated its ruling elite and governance structures.

She said that the EU Disinfo lab had explained how India has used such tools of deflection, deception and disinformation against Pakistan, including at the United Nations.

She said that Indian human rights violations in occupied Kashmir were also documented in two reports by the UN High Commissioner on Human Rights.

“Since August 5, 2019, the High Commissioner has urged India to ‘unlock the situation and fully restore the rights that are currently being denied’ to the people of IIOJK [Indian Illegally Occupied Jammu and Kashmir].

“Not surprisingly, Indian authorities have failed to respond to any of these communications.”

The Pakistani representative said a witch hunt had been launched against those who “dared to report the crimes”.

She added that the Pakistani government had recently released a comprehensive dossier on the systemic and widespread human rights violations being perpetrated by Indian security forces in the occupied valley.

“We call upon the international community to take cognisance of the compelling evidence and hold India accountable for the heinous crimes.

“If India has nothing to hide, it must accept a UN commission of inquiry and agree to implement the Security Council resolutions stipulating a plebiscite to enable the people of Jammu and Kashmir to exercise their right to self-determination,” she said.

Commenting on the Indian allegations of Pakistan sponsoring terrorism, she said: “As for India’s use of the canard of terrorism, regurgitating stale arguments that are typical of all occupiers.

“Let me emphasise that India itself is the principal perpetrator, sponsor, financier and abettor of terrorism in the region.”

She said that India was currently involved in at least four different types of terrorism. First being state terrorism to suppress the people of occupied Kashmir.

Second, funding and supporting terrorist groups, such as the proscribed Tehreek-i-Taliban Pakistan (TTP), which is involved in cross border terrorist attacks against Pakistani military and civilian targets.

Third, India is financing and organising mercenary terrorist organisations against Pakistan to impede economic growth and prosperity of the region, the Pakistani representative said, adding that Indian National Security Adviser Ajit Doval had also publicly admitted to this.

Fourth, India is being guided by a supremacist ideology that has mainstreamed Islamophobia and bigotry against minorities, particularly Muslims, in its political discourse, she said.

The Pakistani representative concluded her speech by stating that the Indian delegation would do well to reflect on the troubling trajectory of their state, rather than “indulging in patent falsehoods about Pakistan”.

“India must realise that it has continuously and miserably failed to suppress the Kashmiris living under its occupation from demanding their inalienable right to self-determination,” she said.

In a tweet, he said: “Saima Saleem exercising right of reply in UNGA. Saima is visually impaired, but [the] way [in which] she spoke [it] seems her heart can see everything. You have made us proud. Thank you.”