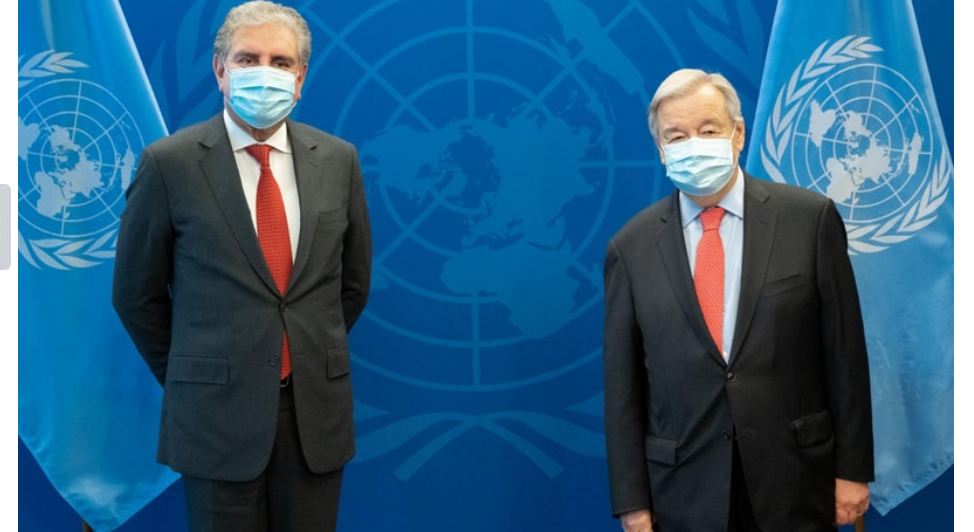 ISLAMABAD, SEPT 25: Foreign Minister Shah Mahmood Qureshi met UN Secretary General Antonio Guterres on the sidelines of the 76th session of the UN General Assembly in New York on Friday and stressed “urgent action” to address the humanitarian crisis in war-torn Afghanistan, according to a statement issued by the Foreign Office (FO).

“Qureshi underscored the need for urgent action to address the prevailing dire humanitarian situation in [the] country, calling for the continued political and economic engagement of the international community to end [the] decades-long conflict,” the statement said.

It added that the foreign minister also highlighted Pakistan’s ongoing efforts to address the humanitarian situation and those aimed at achieving lasting peace and stability in the neighbouring country.

Moreover, the statement said, Qureshi briefed Guterres on the “deteriorating human rights” situation in Indian-occupied Kashmir and shared with him a “comprehensive dossier containing evidence of gross, systematic, and widespread human rights violations, war crimes, crime against humanity and genocide being perpetrated by Indian occupation forces” in the valley.

Qureshi also expressed hope that the UN would play its role in ensuring that the people of occupied Kashmir were able to “exercise their inalienable right to self-determination as enshrined in the relevant UN resolutions”.

According to the statement, the minister called for making the UN Security Council (UNSC) “more representative, democratic, transparent, effective and accountable to address the multiple challenges” faced by the world.

He emphasised that reforms must be decided by consensus and member states must be allowed the necessary time and space to evolve a solution acceptable to the entire UN membership, the statement said.

Qureshi also called for the need for stemming the rising tide of Islamophobia, ending vaccine inequity, and ensuring adequate financing for developing countries to respond to the pandemic and the resulting economic crisis.

After the meeting, Qureshi briefly shared the details of his talk with Guterres in a tweet.

“We look to the UN to play central role in addressing and overcoming these challenges.”

According to the FO, the foreign minister also met the president of the 76th Session of the general assembly, Abdulla Shahid, on the day and congratulated him on his election to the position.

Qureshi expressed the hope that Shahid’s presence in this important office would help with making progress on important issues on the UN agenda.