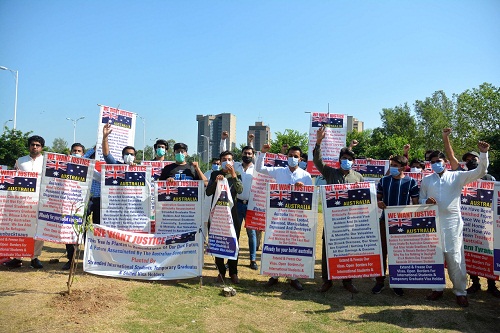 ISLAMABAD: The students who have been denied entry in Australia despite having valid visas protested against the Australian government in Islamabad.

The Government of Australia has decided to close its international border for all  temporary visa holders until further notice due to COVID 19 situation all around the  world. It has been nearly 18 months now; the Australian borders haven’t opened for  temporary visa holders. Australian Universities and other education providers are  pushing students to study online but students have serious reservations toward  online education; some of the students who took a few online classes are not  satisfied with the quality and standard.

The essential reason for selecting these western countries is because of their high  quality of education and educational facilities such as libraries, labs, workshops,  work placements, and most importantly a foreign exposure. Unfortunately, all this is not available in online study platforms. Due to these circumstances, many students are now facing severe mental health issues; they are severely depressed, frustrated,  and worried about their future. Many students are suffering from severe stress,  depression, anxiety, high blood pressure, etc. In fact, one of the students has committed suicide which is deeply saddening. The main cause of this frustration and depression is because students can see that the life savings of their parents have been wasted. Furthermore, another issue is regarding those students who were in their final year or final semester of their studies in March 2020 and are unable to complete them. All the students who are not able to go back to Australia have their  savings in Australian banks, their cars, houses, important documents such as original  education documents, employment documents, property documents, tax papers  and other important stuff are in Australia and they themselves are in their home  country. Unfortunately, in the past 18 months, the Australian Government has not given any plan or even a policy statement to accommodate these students, who were a major part of their society and community a few months back.

The situation of 485 Graduate Visa holders is even worse than international students  because they already have invested thousands of dollars in Australia in academic and  non-academic ways and as per promise; they have not been given a fair chance to  gain relevant work experience while living in Australia.

Temporary Visa holders in the category of skilled workers, such as subclass (485,476,  491, 189, 190 & 489) are also not able to return to Australia and their visas are now at  the edge of expiry. As per decent calculation, there are approximately 25 thousand Australian international students and temporary visa holders stuck in Pakistan and are not able to go back to Australia due to the travel ban. Unfortunately, the Australian government does not have any plan for the return.

To date, the current number of students & temporary graduate visa holders has  increased up to 25 thousand. These students and Temporary Visa Holders have already invested approximately PKR 32 billion in the Australian economy.