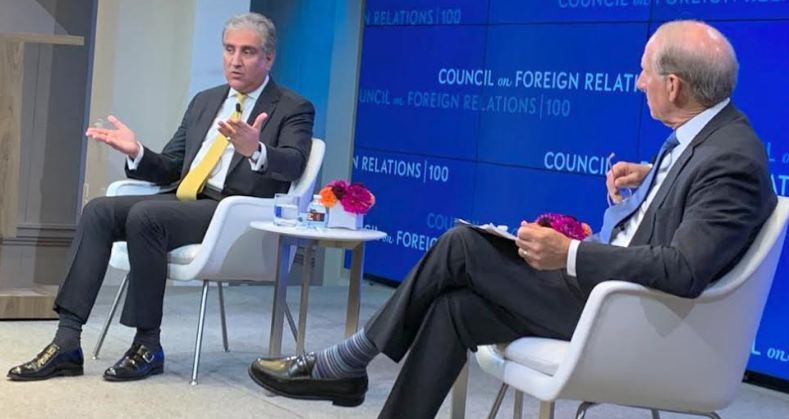 NEW YORK: Pakistan’s Foreign Minister Shah Mahmood Qureshi has said that with the end of the U.S. mission in Afghanistan, Pakistan wanted to build a more broad-based and multidimensional relationship with the United States.

Addressing the Council on Foreign Relations in New York he says Pakistan wanted to “break out of the cyclical pattern” that had defined Pakistan-U.S. ties in the past and find new anchors for the relationship in trade, investment, and people-to-people exchanges.

Qureshi said that an economically strong Pakistan would be “an anchor of stability” in the region, which had suffered because of 40 years of conflict in Afghanistan. He stressed that Pakistan wanted to work with the United States in areas that would create jobs and economic prosperity on both sides of the Pakistan-Afghanistan border, helping the Afghan people rebuild their country.

Pakistan’s Foreign Minister said that isolating Afghanistan had proved to be a mistake in the past. He says that the international community may be able to encourage progress towards a more inclusive government in Afghanistan through sustained engagement.

Qureshi stressed that a stable government in Afghanistan would be more effective at denying space to terrorist groups. While the Taliban should be held to their commitments on counter-terrorism, human rights, and political inclusivity, the immediate priority must be to help the Afghan people as they confronted a potential humanitarian crisis.

Foreign Minister said that Prime Minister Imran Khan had offered dialogue to India soon after assuming office. He says India had not only rebuffed Pakistan’s peaceful overtures, but destabilized the entire region by its illegal actions of 5 August 2019 in Occupied Jammu and Kashmir. Even so, India had failed to suppress the Kashmiri freedom struggle, which was laid bare by its bewildered and inhuman response to the death of Syed Ali Shah Geelani.

Qureshi said that Pakistan remained committed to finding a peaceful solution to the Jammu and Kashmir dispute but the onus was on India to create the enabling environment for a meaningful and result-oriented dialogue. He hoped that the international community would not sacrifice the principles of self-determination and freedom to political expediency in Kashmir.

Earlier president CFR Ambassador Richard Haass welcomed the Foreign Minister to the Council, which is one of the United States’ leading think and the publisher of the Foreign Affairs journal.

Shah Mahmood Qureshi outlined his vision for the future of the Pakistan-U.S. relationship and highlighted Pakistan’s efforts for regional stability during a keynote address at the Council on Foreign Relations in New York.

The event was attended by a large number of analysts and members from the think tank community as well as media persons. The Foreign Minister’s remarks were followed by an interactive question and answer session with the audience.