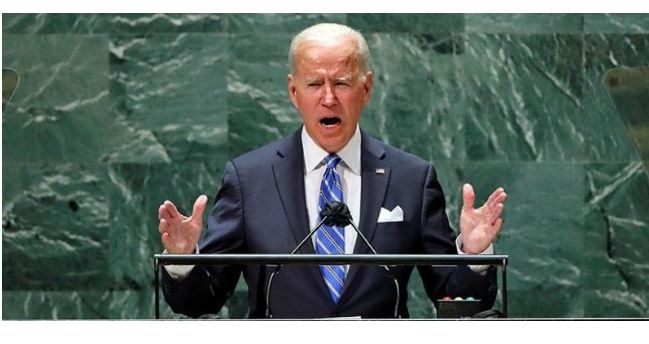 NEW YORK: In his first address to the United Nations, US President Joe Biden has pledged cooperation with allies through “a decisive decade for our world”.

His reassurances come amid tensions with allies over the US’ Afghanistan withdrawal and a major diplomatic row with France over a submarine deal.

The US also announced it was doubling its climate finance pledge by 2024.

Reaffirming his support for democracy and diplomacy, Mr Biden said: “We must work together like never before.”

The 76th General Assembly in New York City takes place against the backdrop of a climate crisis and a once-in-a-century pandemic, both of which have sharpened global divides.

Mr Biden pushed for cooperation on these fronts, saying: “Whether we choose to fight for our shared future or not will reverberate for generations to come. Simply put, we stand, in my view, at an inflection point in history.”

His promise to increase climate finance for developing countries to $11.4bn (£8.3bn) by 2024 means the US will offer just over half of the European Union’s pledge.

The developed world had pledged to provide $100bn a year by 2020 to help poorer nations cope with climate change, but this has still not been achieved.

Over the weekend, UN secretary-general Antonio Guterres warned that the US and China were headed for “a Cold War that would be different from the past one, and probably more dangerous and more difficult to manage”.

But Mr Biden on Tuesday stressed that the US is “not seeking a new Cold War or a world divided into rigid blocs”.

The US, he said, “is ready to work with any nation that steps up and pursues peaceful resolution to shared challenges, even if we have intense disagreements in other areas”.

Touting his pullout from Afghanistan, which has been criticised by allies at home and abroad, Mr Biden noted that “military power must be our last resort”.

World leaders at odds with former President Donald Trump had hoped for a more stable and reliable America under his successor’s leadership – but Mr Biden’s most recent foreign policy moves have made some uneasy.

The US’ lack of coordination during the Afghanistan exit after two decades of war rankled allies and led to an international scramble to evacuate. The Nato mission at the time of the withdrawal comprised troops from 36 countries, three-quarters of whom were non-American.

Last week, a trilateral US-UK deal to provide Australia with nuclear-powered submarines infuriated the French, who had their own five-year-old contract to build conventional submarines for the Australians. French foreign minister Jean-Yves Le Drian described the agreement as “a stab in the back”, and the top French diplomats in both countries were recalled.

The Biden administration has also seen international criticism over alleged US hoarding of Covid-19 vaccines and non-reciprocal travel restrictions.

At the end of his first address, Mr Biden promised that the US would lead.

“We will lead on all the greatest challenges of our time, from Covid to climate, human dignity and human rights, but we will not go it alone,” he said.

“We will lead with our allies…with all those who believe as we do.”