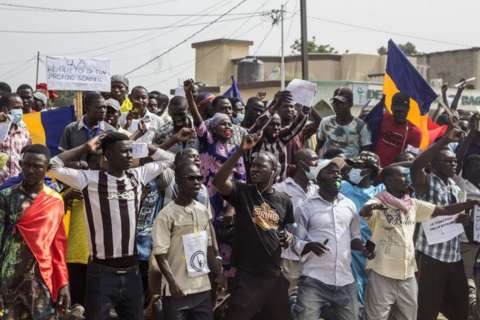 Protesters marching against the junta in Chad took to the streets of the capital, N’Djamena.

The country is currently being governed by what’s known as the Transitional Military Council (TMC) under the leadership of Mahamat Idriss Déby Itno.

He came to power after the death of his father Idriss Déby Itno in April, who had been president since 1990.

The TMC’s opponents see its continued rule as a power grab.

They accuse France of being behind the junta, and marchers were chanting “Chad is not a kingdom,” and “no to French support for the Déby father-and-son system”.

The junta has said there will be elections after an 18-month dialogue, but this has not started and the body that’s supposed to draw up a new constitution has not been formed.