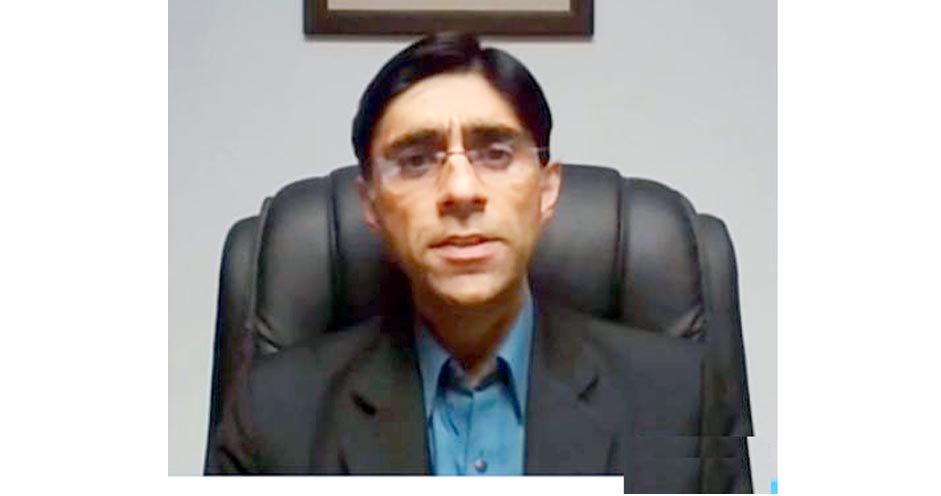 ISLAMABAD, SEPT 10: National Security Adviser (NSA) Moeed Yusuf dismissed on Thursday allegations of Pakistan extending support to the Taliban in Panjshir — the last holdout Afghan province where the group defeated resistance forces earlier this month — linking the accusations to a “fake news network” created by India and a “bogey” by previous governments in Kabul.

On September 7, demonstrations were held in Kabul against the backdrop of the Taliban taking over Panjshir, with protesters denouncing perceived meddling by Pakistan.

Yusuf was asked about these claims during an appearance on CNN’s Connect the World, where journalist Becky Anderson referred to the accusations by anti-Taliban forces in Afghanistan and Iran’s foreign ministry condemning “foreign interference” in the war-torn country.

“Did the Pakistani army support the Taliban attack on anti-Taliban forces in Panjshir using drones and/or other weaponry?” asked Anderson.

“It’s preposterous is all I can say,” replied Yusuf.

The NSA pointed out that Pakistan had been saying that “project Afghanistan” was failing because of the country’s internal problems, some of which he attributed to a corrupt government.

Yet the world saw Pakistan as the problem, he said.

“This was scapegoating by previous governments in Kabul which, unfortunately, the international community started believing because they didn’t want to talk about their own failures,” he said.

Specifically answering allegations regarding Pakistan helping the Taliban with drones in Panjshir, the NSA held up a paper showing screenshots of Indian news channels, which he said had been spreading fake news about Pakistan.

Pointing to an image on the paper, he said: “This is mainstream Indian media showing an American jet flying over Wales in the United Kingdom and presenting it as Pakistan doing something in Panjshir.”

He went on to say that India had spent millions of dollars in “creating a fake news network [against Pakistan]”.

Anderson also questioned Yusuf on Pakistan’s involvement in the formation of the new Taliban government, referring to the ISI chief’s recent visit to the country.

At that, Yusuf asked, “Why did the CIA director go to Afghanistan much before my ISI chief went there?”

He said that the ISI chief had visited Afghanistan, and would visit again, as Pakistan shared a border with Afghanistan and had to engage with the new government to make sure that the border was secure.

Yusuf also pointed out that other countries had sought Pakistan’s help for evacuation from Afghanistan and cooperation was needed on that front as well.

Dubbing the reports of Islamabad’s involvement a conspiracy theory, he said there was no logic to them, as the ISI chief was interviewed by the media during that visit and that defied that he was on a “secret mission”.

“Pakistan has the right to defend its national security,” he said, adding that it would continue to do so by engaging in Afghanistan.

He further said the world needed to move beyond these conspiracy theories and cooperate to benefit the common Afghan man.

Yusuf then denied Islamabad’s involvement in the formation of the new government in Afghanistan, saying that it was a sovereign country.