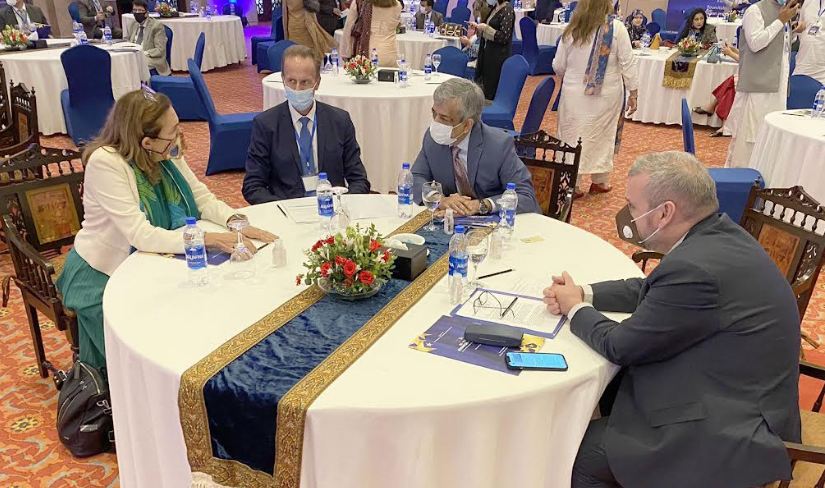 The speakers expressed these views on the occasion of launching of the Forum. Ambassador of European Union Androulla Kaminara, diplomats a large number of businessmen and members of the civil society attended the launching ceremony. Renowned businessmen Khurshid Barlas facilitated the event.

The EU ambassador shared her vision to enable Pakistani SMEs to benefit from a wide range of GSP + concessions. She said, to make it easier for SMEs to operate in the EU single market and beyond, the European Commission took actions to remove regulator and practical obstacles to doing business for the SMEs which provided opportunities for them to scale up their presence in the EU.

She wished to replicate this in Pakistan and said she was prepared to help the government and Pakistani business people to achieve this together. She added diversification into other sectors will boost rade and ultimately allow Pakistan to take full advantage of GSP plus.

The EU ambassador while responding to media queries said that a few days ago the EU heads of missions had invited the information minister Fawad Chaudhry for a briefing on the proposed PMDA. The minister told them that there was no draft as such. She said EU believes in the press freedom and that message was conveyed to the minister as well.

It may be mentioned here that the inaugural event was attended by representatives of local SMEs from four sectors: Gems, Jewellery and Mining, Information Technology, Handicrafts and Fashion-wear as well as Travel and Tourism. The EU-Pakistan Business Forum initiative aims to provide opportunities for both EU and Pakistani businesses to work together to become engines of development and partnership and contribute to enhancing bilateral trade. During the first Islamabad session, the participants were apprised about how they could benefit from the European Union’s GSP+ Scheme, that provides two thirds of tariff lines duty free access to the EU market with the rest on preferential duties.

Other sectors including the agricultural and auto-parts manufacturers will be included in subsequent meetings. The Pakistani economy consists of almost 3.3 million SMEs comprising of service providers, manufacturing units and start-ups.

SMEs make up over 30% of Pakistan’s GDP, account for approximately 25% of export generation and provide over 70% industrial employment. While in the EU, Europe’s 25 million small and medium enterprises (SMEs) are the backbone of the EU economy. SMEs provide two out of three industrial jobs in the EU. The Business Forum will play a key role in bringing together SME’s from the EU and Pakistan to enhance their export orientation as well as collaboration in technology transfer and promotion of businesses.