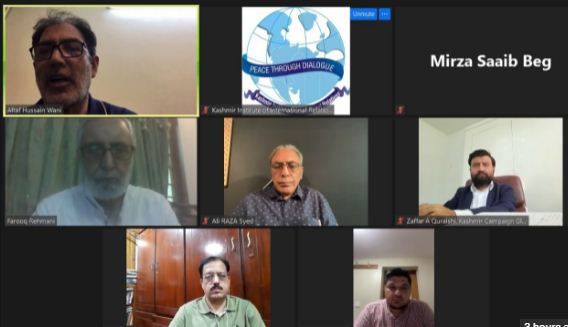 ISLAMABAD, JUL 20 (DNA) – Speakers at a Webinar organised by Kashmir Institute of International Relations (KIIR) while terming the lingering Kashmir dispute as a threat to regional peace have urged the world community to re-double its efforts to help resolve the dispute peacefully.

In his opening remarks the KIIR Chairman while highlighting the significance of the day said that 19th July was a defining moment in Kashmir’s recent history. “The adoption of the unanimous resolution demonstrated Kashmiris’ resolute and unshakable faith in Pakistan and their unwavering commitment to join the country that was yet to born,” he said.

Terming it as a landmark achievement of the Muslim Conference, Wani said, “It was on this day when Kashmiri leadership met under extra-ordinary circumstances at former AJK President Sadar Ibraheem Khan’s Aabi-Guzar residence in Srinagar and adopted the historic resolution and decided to link Kashmir’s future with state of Pakistan”. The day, he said, marks the turning point in Kashmir’s political history, which practically set a firm guideline and framework for the Kashmir’s future generations to achieve the cherished goal.

Drawing parallels between the present and past situations in the Indian illegally occupied Jammu and Kashmir, the speakers recounted the wounds inflicted upon the people of Kashmir by the tyrant Maharaja and the Indian rulers. They said, “So far as the civil liberties are concerned Maharaja was no different from the incumbent Indian rulers.”

“Under the Dogra rule Kashmiris had witnessed severe restrictions; civil and political rights such as freedom of press, freedom of religion, freedom of expression, freedom of assembly, freedom of speech, the right to privacy, the right to equal treatment under the law remained severely restricted,” they said, adding that during the tumults period (Mid 1940s) Maharaja had imposed a complete ban on all political activities.

“The same situation was created in 1947 by the Maharaja and his allied forces in Jammu and Kashmir as Kashmiris are facing today; No one was allowed to host the Muslim Conference convention be it a hotel park, residential flat or Shakara,” the speakers said. Lauding the former AJK president Sardar Ibrahim Khan’s contribution, they said that the credit goes to Ghazi-e-Millat (late) who offered his house for the said convention.

Referring to Maharaja’s policies of deceit and deception they said, “Being the sole representative organization of the Kashmiri Muslims’ aspirations the Muslim Conference gathered and took the historic initiative notwithstanding the restrictions.”

Voicing their concerns over the present political and human rights situation in the region, the speakers said that the Modi-led fascist regime had broken all records of brutality and barbarism. “The Indian government’s 5th August 2019 move bears all the marks of authoritarianism and despotism”, they said, adding that the unilateral decision that robbed Kashmiris of their distinctive political, cultural and national identity was totally undemocratic, unlawful and authoritarian in nature. The move fraught with serious political ramifications, they said, posed a serious existential threat to the Kashmiris who feel completely dispossessed, demoralized and marginalized.

“After the passage of over seven decades Kashmiris as a nation have been stuck in the same situation,” the speakers said. While essential fundamental freedoms and democratic rights remain severely restricted, people in occupied Kashmir continue to battle for the survival, they added.

“Even today political activists are accused of secessionism and charges of sedition are levelled against them under black laws just for the expression of their consciously held political beliefs,” they deplored. “Rights defenders, civil society activists, academicians, lawyers and even journalists are being subjected to surveillance, harassment, and sometimes imprisonment under black laws such as Unlawful Activities (Prevention) Act (UAPA) and Public Safety Act (PSA)”, they said. “On the other hand, continued bloodshed, violence and killings of Kashmiri youth by Indian occupational forces continue to wreak havoc on the lives of Kashmiris,” the speakers said.

“Despite the BJP government’s repressive policies Kashmir’s young generation is scripting the history of resilience and courage by shedding their red-hot blood to achieve the collective cause for which Kashmiris have rendered matchless sacrifices,” they said.

The speakers also hailed all those fearless people who continue to raise their voice for the voiceless Kashmiris. They appealed to the global community to break their silence on the issue and play its much-needed role to resolve the lingering dispute peacefully in line with the UN Security Council resolutions.

The speakers hailed Pakistan and other brotherly countries for their continued support to the Kashmir cause. They also appreciated the UN Human Rights Council and other global rights groups for raising their concern over the worsening human rights situation in IIOJK. = DNA